How is Thai Culture Different to American Culture? Living abroad gives you some excellent insights into foreign cultures.

Especially in terms of being able to compare them viz-a-viz with other cultures.

In this blog, we hear from Nicola Carter, who spent some time living in Thailand.

Both living, working and raising kids in the country taught her a lot about the place.

She shares her reflections on Thai culture; in particular how it differs from US culture.

Let's see what she thinks!

She found 7 key differences as she explains below.

7 Things About Thai Culture That Contrasted with the USA

"I spent 6 months travelling around Thailand with my kids and husband and was lucky enough to experience the differences in culture close up.
Here are some of the main differences I found between Thai culture and American culture."

1. Religion is far more obvious in Thailand than in America:

Although religion plays a role in American culture, it is far less obvious than the role played by Buddhism in Thailand.

Religion is an important part of Thai culture. As such, you’ll see signs on trains and busses which instruct you to give up your seat for Monks.

You will also see that Monks play a very visible role in daily life in Thailand. Although Monks should only speak if really necessary, the Monks we met happily talked to us about Buddhism.

For reasons of protecting the sacred, it’s important to know that it’s unacceptable to take a selfie with a Buddha statue (unless done with absolute respect – no ‘v’ signs with the fingers or messing about) or to try and take Buddha statues out of the country. In fact, you'll find your statue is confiscated by customs if you try to take it home.  It's not only adults who are expected to demonstrate respect - the same expectations are placed on kids. .

Kids in America are generally encouraged to be inquisitive and explore. When it comes to Buddha statues, they tend to find them fascinating and need to be intercepted before they start trying to climb on them. It’s also really unacceptable for your children to try and pinch any food that his been donated to the monks by locals – even if it’s sweets and fruit beautifully wrapped and left in the reach of tiny hands!

One of my kids pointing out the candles used in Buddhist temples across Thailand. Along with incense and flowers, candles are placed in front of Buddhist shrines or statues and images of the Buddha as a mark of respect. They are often accompanied by offerings of food and drink. The light of the burning candle flame represents the light of the Buddha's teachings.

2. The extended family in Thailand is more evident than in America:

People in America tend to be more self-sufficient and less dependent on others.

As such, it’s common in American culture for family units to be fairly small i.e. mum, dad and kids.

In Thailand however, there is a great deal of value placed on ‘the group’ which means that nuclear families tend to live with parents and other extended family members.

In American culture, great value is placed on individuality which means that many kids leave home at a fairly young age to ‘make their way in the world’ or, to attend university.

In fact, in American culture, it’s fair to say that kids in their thirties – or, even in their twenties, might well be considered ‘odd’ if they still live with their parents. No doubt, acquaintances would share a quiet word about why the kid in question hasn’t yet flown the rest.

Leaving the family at a young age is really rare however in Thai culture as most kids stay with their families until they marry. It’s extremely unusual to see a young Thai person living it up with their friends in a flatshare in the city. It happens – but it’s not common.

I’ve mentioned the importance of group and harmony in Thailand. A consequence of this is a behaviour known as ‘face’. Face relates to reputation – which is really important in Thailand.

We met many Thais who did an admirable job dealing with some really difficult tourists. It was amazing to see that, even though they probably didn’t like some of the people they were dealing with, they would still give big smiles and give the impression that they really liked the person they were speaking to.

We came to know a few tourists who complained that someone Thai had agreed to something, only to find out later that the person didn’t have the means or ability to make this thing happen. What the tourists didn’t understand was that their Thai contact was trying to protect their sense of face by not appearing ‘unable’ and also protecting the face of the tourists by not giving them the bad news.

It can take a bit of getting used to, but when you’re in Thailand it’s really important to understand that telling ‘white’ lies like this is not meant to deceive people.

In American culture, however, people tend to say things as they see them. If they want to say ‘no’ to something then they will, albeit diplomatically and politely. Face plays a role but it’s not a significant driver as it is in Thailand. Couple the lack of face with the strong value placed on individualism, and you will see that Americans rarely have a hard time saying what they think and asserting their individual opinions.

When we were travelling in Thailand, we saw quite a few occasions where people spoke or behaved in a way that would have caused Thais a loss of face.

Take for example a trip to a local restaurant where someone was complaining loudly about the food in front of other customers. The waitress somehow managed to keep calm through an episode that was clearly distressing for her and the Thai diners also seemed embarrassed on behalf of the waitress. Clearly, we experienced issues during our time in Thailand and had to make them known, but it’s important to do so with someone quietly and in private. 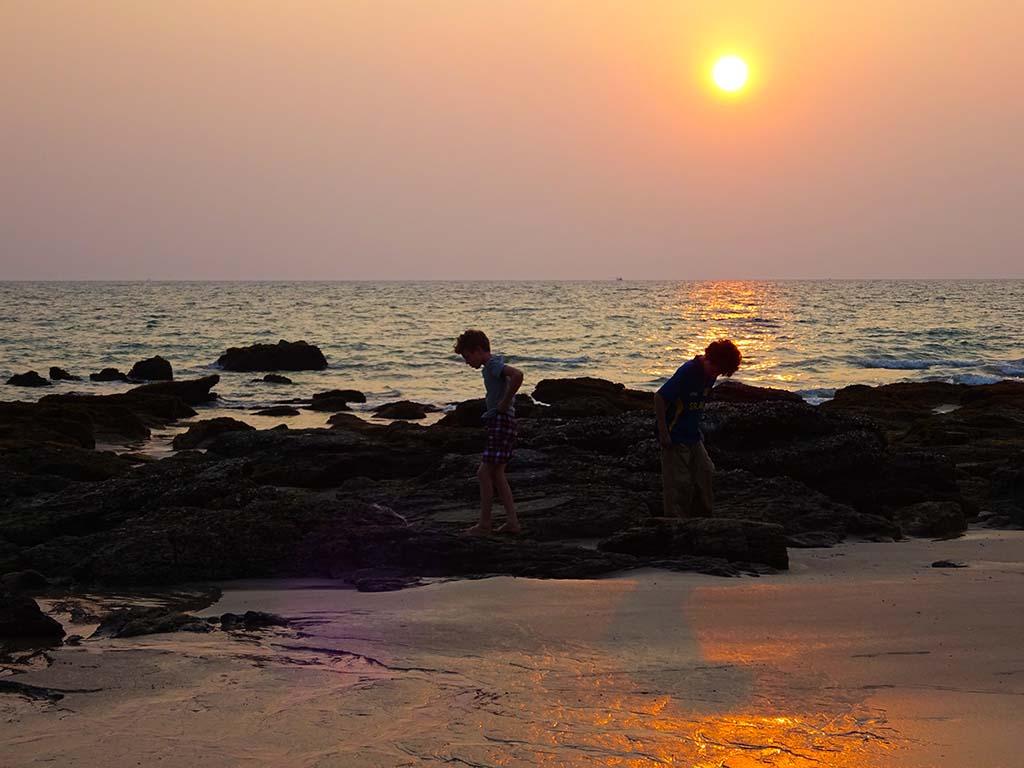 Sunset over the island of Koh Lanta, (Krabi) in Thailand.

Wherever you go in Thailand, you will see pictures of the royal family or the King.

The royal family are deeply rooted in Thai culture and help form part of the national identity.

Clearly, this is not the case in America as royalty plays no role at all - there isn’t one! If you’re from a country with no royal family then be aware, that you can be kicked out of the country at best for causing offence to the royal family and imprisoned at worst.

While we were travelling there, a man was jailed for 35 years (subsequently halved) for making negative comments on Facebook about royalty.

Avoid taking selfies next to posters of the King, never say anything bad AT ALL about him and don’t make jokes about him (even if he’s wearing the mini crop top and fake tattoos that he’s very fond of). You should even treat the currency with respect as the King’s portrait is featured on the notes. Tucking notes into your bikini top is an absolute no.

Feet tend to be quite innocuous in America and people don’t really have hang-ups about them.

This isn’t the case in Thailand, however. During our trip, a young girl was reprimanded for hanging her bare feet over the back of a chair towards a picture of the King.

Not only are the feet considered dirty in Thai culture, which means you shouldn’t point them at people, but pointing the soles of your (probably dirty) feet at the King is asking for trouble…

On the whole, the food tended to be much tastier in Thailand than in America.

Admittedly, however, MSG seemed to be used as liberally as salt and pepper and we had to ask that MSG was not used in the restaurants we visited.

However, the food seemed to be a lot healthier than the street foods you might find in America. Most of the food is wok-fried with spices, vegetables and a little meat. We felt quite healthy eating there. I don’t think we’d have felt quite so healthy eating out at fast food places in America three times a day.

"So, in summary, yes the culture is quite different in Thailand. However, by learning some of the basic etiquette and the dos and don’ts, Thailand made for a great family-friendly experience."

If you're interested in learning more about Thai culture, then have a look at our eLearning online Thai cultural training course.

This eLearning course is a great way to prepare expats and business personnel for assignments in Thailand.

The course can be accessed via the Commisceo Global learning platform or purchased as a SCORM course for upload to your inhouse LMS.