The Impact of Culture on COVID-19 Cases and Deaths Is there a correlation between culture and the COVID-19 pandemic?

This is a question we’ve posed before in previous blogs.

However, there is now research on exactly how much of an impact national cultural differences have had on the cases and deaths of COVID-19.

A new study published by The Lancet, entitled “The relationship between cultural tightness–looseness and COVID-19 cases and deaths: a global analysis,” provides some hard facts.

In this blog, we’ll give you a quick overview of some of the key points found by the research.

As far back as March 2020, we recognised some acute differences between countries initially dealing with the COVID-19 outbreak.

Our blog on Chinese culture and how it helped fight the virus, looked at the influence of Confucianism and how this has created a collectivist society which respects authority.

In another blog, we compared this to the USA, where the rights of the individual pervade the culture at every level and any curtailment of liberty is seen as an assault on freedom.

We also had a peek at some differences between the South Koreans and Americans in another.

Now, almost a year later, we have some evidence to back up many of the assertions and observations we made in these blogs.

Culture, without doubt, has shaped a country’s relative success or failure in wrestling with the virus.

The research looked at cases and deaths as of October 2020.

As of October 16th, almost 39 million cases have been reported with 1 million + deaths worldwide.

There are some marked differences between countries.

In order to compare countries, the researchers applied there own cultural modelling, focusing on ‘cultural tightness’ vs ‘cultural looseness’.

In Taiwan, for example, there were high levels of self-regulation and voluntary abidance with rules around social distancing, wearing masks, and avoiding large crowds. This collective approach enabled the country to keep both the infection and mortality rates low without shutting down the economy.

In contrast, countries such as Brazil, the USA, and Spain have struggled to contain the virus and citizens were more likely to violate rules put in place and flout social norms.

In the graph below, you can see the clear differences between countries and their death rates. 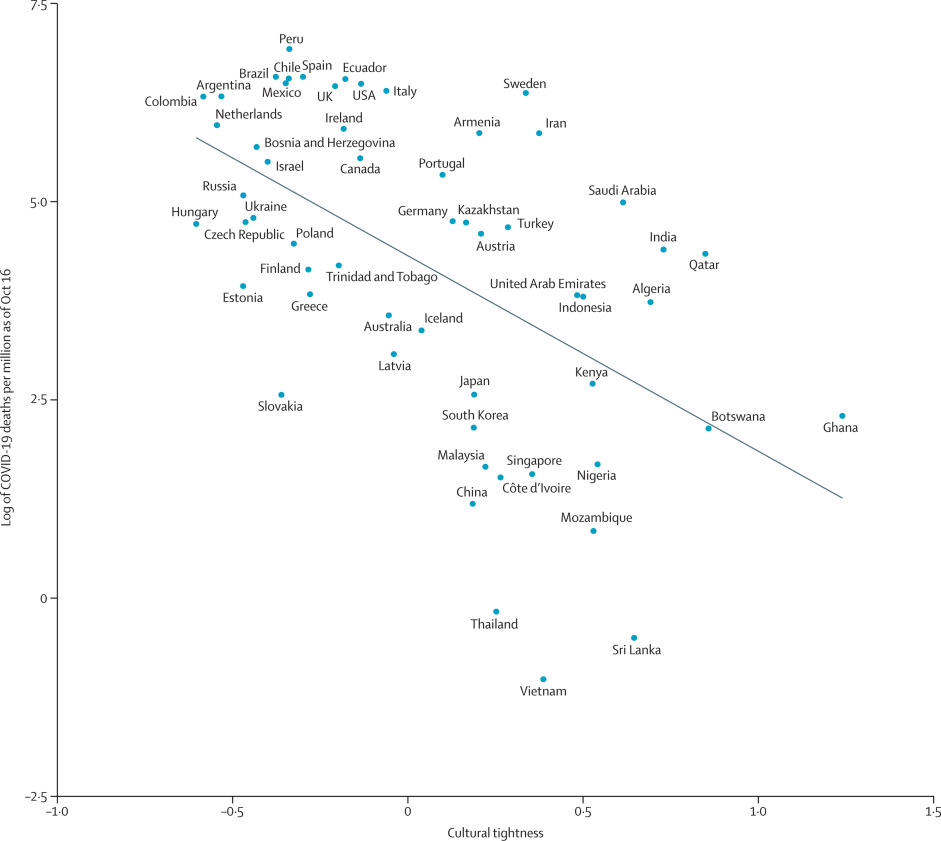 The association of cultural tightness and logged deaths per million [source]

Below are some of the researchers key points:

If you want to dive into the research and statistics yourself, then have a read of the research which will give you much more detail.