As a senior Iran cultural awareness trainer, I spend a lot of time helping businesses understand the nuances of Persian culture.

One topic that many Westerners always struggle with, is the cultural concept 'ta’rof'.

It's essential that anyone travelling to Iran, or working with Iranians, understands this concept in detail - failure to do risks potential offence.

So, let's look at the essence of Persian etiquette in more detail!

How do you pronounce Ta’rof?

Before getting into the cultural nitty-gritty, let's first get the pronunciation right.

There is no need to break, pause, stutter, cough or make any spluttering noises in between any sounds – it’s a nice clean, ta’rof.

Well, in short, it's a form of politeness you will find in Persian, Turkic and Afghan cultures. It is most associated though with Iran and Iranian culture, past and present.

Understanding ta’rof for me is, without doubt, one of those fundamental things you need to understand about Iranian culture.

I learnt it as a pup from my mother, watching and learning when to make ta’rof, how to recognise fake ta’rof, deal with ta’rof misunderstandings and what happens when ta’rof goes wrong.

I never really knew that I knew ta’rof until I became an adult and came across something about it in writing. For all Iranians, it’s the same. Just as most British people don’t know why they automatically offer a guest a cup of tea, Iranians don’t know why they do ta’rof. It’s in the DNA.

As a foreigner, it can be hard to get your head around it. So let’s start simple.

In the UK, as in many other places, it is [maybe not anymore!] polite to hold the door open for someone. Similarly, it is expected to say thank you to someone in their car for letting you cross the road. There are many examples of where people are expected to behave in a certain way. It’s manners, it’s politeness, it’s consideration, it’s all those things and culture wrapped into one.

You could consider these to be a type of ta’rof. However, they all don’t translate into ta’rof in Iran.

For example, holding the door might not be considered polite, but what is important is who enters a doorway first. If you let someone cross the road in your car, if you even get a look you should be happy, forget a thank you.

Let’s look at the door example. This is a really beginners’ introduction to how ta’rof works. So, whoever enters a doorway first is essentially given a subtle kind of status. But the person who makes the other go through the door first also gains status by having made the other person do so, i.e. by being graceful and showing deference to the other person [even if it is fake].

Sometimes you can watch people standing at a doorway for minutes, praising one another and eulogising as to why they should enter the door first.

Bear in mind this would only happen between friends, family or associates; strangers would very quickly work out who is higher in the pecking order, politely offer once or twice then get on with it. For the foreigner it’s ridiculous but to the Iranian, it’s a dance of honour.

Check this video out for a slightly OTT version of very typical events at doorways.

In it you'll see three friends refuse to enter the door first.

They keep insisting one another enters first until they start sitting on the floor and refusing to enter.

As a matter of honour nobody enters first meaning that by nightfall, they are still arguing!

Now let’s go up a notch and look at ta’rof in a familiar public setting – the taxi.

It is not uncommon for taxi drivers to have a chat with you and if you all get on they will at the end of the ride say there is no charge. 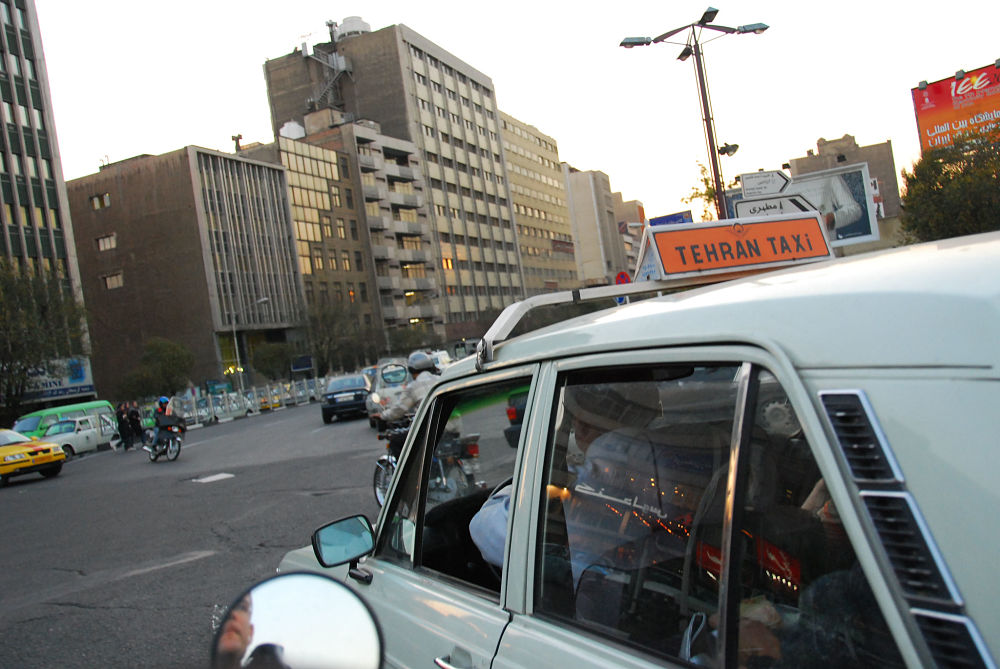 Many foreign visitor has mistaken this for Iranian hospitality and tried to leave the taxi without paying, and even worse, have got into arguments accusing the taxi driver of lying. All he/she did was make ta’rof. When a taxi driver says there is nothing to pay they don’t mean it.

What he/she is actually saying is, “I’ve really enjoyed talking with you. I like you. Thanks.” By stating there is no charge they are trying to act like a host – you need to remember the nomadic heritage here where guests are always welcomed and looked after. If you understand the code that is ta’rof, you will of course understand all of this and then press him/her on how much you owe until it is paid and everyone is happy.

Not paying is not an option. Even if the driver declines the money 1, 2, 3 or even 4 times – keep demanding – if you don’t you could lose face. Some people call this type of ta’rof “fake ta’rof” as both parties know it’s a game.

Food is a huge part of Iranian culture so let’s next examine an example of ta’rof every person who has ever stepped foot in Iran, Iranian national or not, has experienced daily.... ta’rof and food! 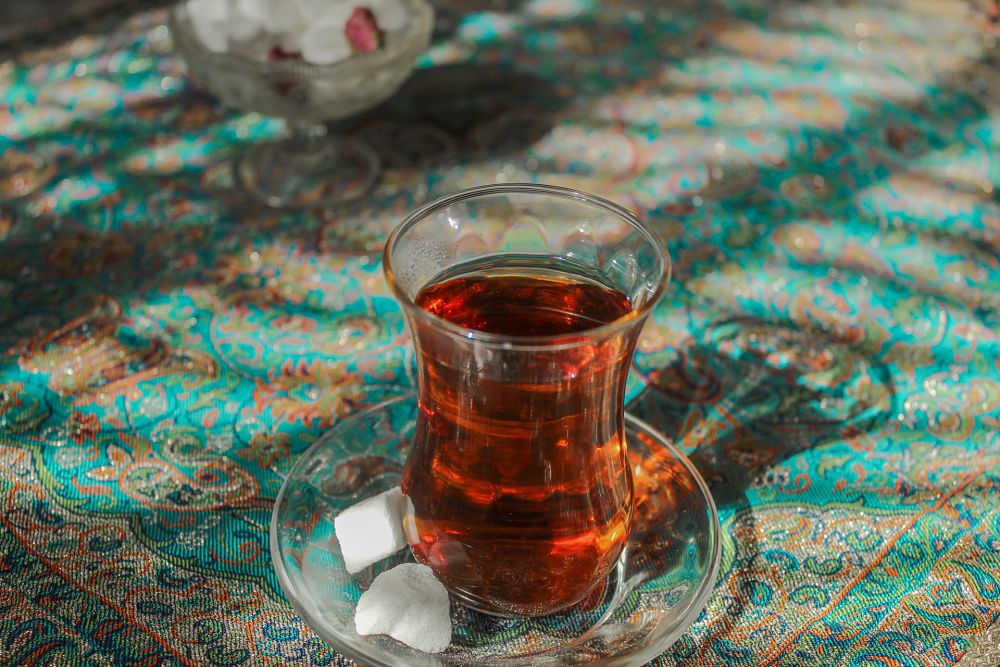 If you go to any meal, are invited to any house for food, then you will be expected to eat seconds and thirds. You must eat to please the host! But you can’t just go ahead and dig into the food once you are done with your first round – you have to pretend you are full, the food was excellent and it would be impossible to fit anything else in.

Your host will then demand you do not do ta’rof (“ta’rof nakon”) – you say 'no' 2 or 3 times and then you pretend you have caved in to their insistence and pile on the food. If you do it any other way, you can come across as either starving or simply a bit uncouth.

When you are offered tea in Iran, it is good etiquette (i.e. showing good tar'of) to initially politely reject the offer. It will then be offered again to which you would again graciously decline, before again being offered at which point you have shown ta'rof and can finally accept the offer!

Check this video in which Iranians make a joke about the fuss they can sometimes make when arguing about who pays the bill in a restaurant.
As you'll see the restaurant owner gets so fed up of the bickering between the two men that he makes them leave! But it's all part of the plan!

Still with me? Starting to see a pattern? It’s all about hiding the obvious to not make a personal transaction impersonal, cold, selfish or unhospitable.

It is important to also remember that ta’rof can also be genuine.

This is where the person genuinely puts themselves out for you. For example, they may share their food with you even though they don’t have enough; someone might give you something you like saying they have plenty more, but in reality, only have that one; or you may be bought something as a gift even if they can’t afford it. This is all ta’rof.

The thing about ta’rof is that you can apply it to almost any situation in which there is human interaction, domestic, social, business, wherever, whenever. This possibly is what scares foreigners learning about the cultural concept. At first it is of course bizarre, but it soon becomes second nature once you’ve spent time with the people.

It is key to remember that ta’rof was formed over 100s if not 1000s of years. As a foreigner, it is going to be impossible to understand it without living and seeing it. It takes time to learn the code and until you do, you can always stick with the phrase “ta’rof nadaram” – I don’t do ta’rof.

A Foreigner's Thoughts on Ta'rof

“…..I was a guest in Iran, and in Iran a guest is accorded the highest status, the sweetest piece of fruit, the most comfortable place to sit. It's part of a complex system of ritual politeness—taarof—that governs the subtext of life here.

Hospitality, courting, family affairs, political negotiations; taarof is the unwritten code for how people should treat each other. The word has an Arabic root, arafa, meaning to know or acquire knowledge of. But the idea of taarof—to abase oneself while exalting the other person—is Persian in origin, said William O. Beeman, a linguistic anthropologist at the University of Minnesota. He described it as "fighting for the lower hand," but in an exquisitely elegant way, making it possible, in a hierarchical society like Iran's, "for people to paradoxically deal with each other as equals.

Wherever I went, people fussed over me and made sure that all my needs were met. But they can get so caught up trying to please, or seeming to, and declining offers, or seeming to, that true intentions are hidden. There's a lot of mind reading and light-hearted, meaningless dialogue while the two parties go back and forth with entreaties and refusals until the truth reveals itself.

Being smooth and seeming sincere while hiding your true feelings—artful pretending—is considered the height of taarof and an enormous social asset.

"You never show your intention or your real identity," said a former Iranian political prisoner now living in France. "You're making sure you're not exposing yourself to danger, because throughout our history there has been a lot of danger there."

Finally to finish off the blog, here is a cute little video I found made by an American-Iranian family who tries to explain what ta'rof is and what it means to them.

For more information, you might want to consider the following:

Get ready for working in Iran by enrolling in the most comprehensive Iranian cultural training programme on the web!  Jam-packed with culture critical guidance for professionals travelling or moving to Iran for business purposes.

Prefer something more tailored and personal? Then take part in a live, customised Iranian cultural training webinar with one of our Iran culture specialists.

Alternatively, have a read of our Iran Country Guide or our Iran Management Guide.

Photo of taxi in Tehran by Paul Keller on Flickr (CC BY 2.0)

Photo by Persian tea by abolfazl ranjbar on Unsplash