When in Saudi, Do Not Dab

Aug 14 Posted by Neil in Expatriate A word of warning for anyone travelling to Saudi Arabia - stay well away from any dabbing. The move could see you spending some time in jail.

Abdullah al-Shahrani, a Saudi entertainer, was recently detained by Saudi authorities after dabbing during a concert in the city of Taif.

Upon his release, an immediate apology was released by al-Shahrani for the "spontaneous and unintentional move".

The "dab", which dates back to a 2014 music video by rapper Skippa da Flippa, has since become a popular move used by celebs, artists, athletes, etc from all over the world. As a result, among the younger generation, the dab has become an iconic move.

However, Saudi authorities do not recognise any aspect of the dab being related to popular culture, instead connecting it to the consumption of narcotics.

The Saudi Interior Ministry’s National Drug Control Commission considers the move to be a reference to smoking cannabis.

In a poster published by the Commission, the move is incredibly referred to as “the inhalation of the vapours of hashish or marijuana”.

The secretary general of the Commission, Abd al-Elah al-Sharif said in an interview with al-Arabiya “the move is a well-known move…known to represent smoking hashish which leads to addiction.” 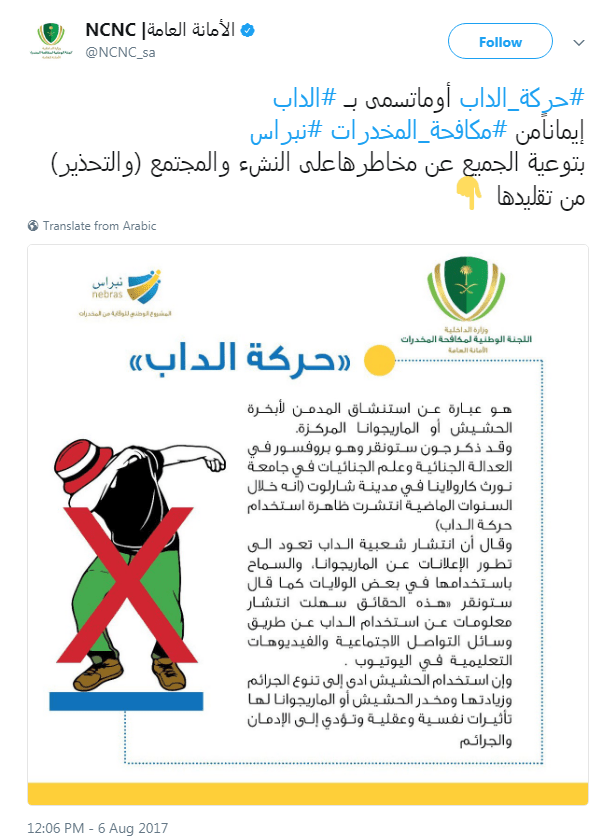 So be warned, if you dab in Saudi Arabia and get caught, you could face prison, a fine or both!