What’s it Like to be a Woman in Saudi Arabia? Despite a history of limiting the visibility of women, the application of harsh gender laws have instead made them the most visible part of the Saudi identity.

As such, when many Westerners think of Saudi Arabia, niqab clad women without any rights, are one of the first images that come to mind.

Saudi women get a great deal of attention in the international press and their stories are often given a voice.

While some reports argue that females in Saudi Arabia are oppressed, others argue that the situation isn’t nearly so dire.

In fact, they argue, women have considerable freedom.

Below, we’ve given our high-level view.

Saudi women have traditionally been part of a culture of few rights and great restriction, with men wielding absolute power over their female counterparts.

Many of the laws in Saudi Arabia made women completely dependent on men, such as the prohibition on female driving which forced them to rely on men for even the simplest of activities such as, collecting children or going to the shops.

The most controversial system to which women have been subject is the ‘Guardianship System’ which requires designated male relatives (known as a ‘Wali’) to approve the activities of their female relatives, servants and spouses.

Women must seek their Wali’s approval for passport applications, access to education, marriage, travel, access to medical facilities and even for exit from prison upon completion of their sentence.

Subject to much debate is the mobile app ‘Absher’ which makes the tracking and control of women within the Kingdom all the easier.

Although the app enables the simplification of every-day tasks such as registering vehicles and visa renewals, it also allows Walis to dictate where and when their female dependants can travel. Coupled with this is a notification service which alerts a Wali if their female dependants are trying to board a plane or a train; essentially allowing them to refuse them from boarding if they choose.

These are just a few examples of the way in which Saudi women have been subject to male authority.

In fact, it’s fair to say that they have been one of the most controlled group of women in the world. It’s not only the legal system which has helped enforce this situation.

Other factors, such as religion and tribal cultures, have gone a long way to framing and facilitating these inequalities.

The situation has been so dire, that high profile cases of women escaping the Kingdom are becoming increasingly common.

In 2017, for example, 815 Saudis claimed asylum (United Nations Refugee Agency’s database), compared to 195 people in 2012. The number of females in this group is not known.

Crown Prince Muhammad Bin Salman, a.k.a MBS - seen as a modern reformer by some, not all.

The Prince of Change

The internet has enabled Saudi women to find their voice and there is an appetite globally for hearing their stories.

It’s fair to say that many of these stories have pointed to women escaping situations in which they have subject abuses due to a lack of rights.

The Crown Prince is only too aware of these stories and has tried to address the situation by making women a core part of his agenda of change.

He has now given them the right to drive, attend mixed sporting events and pursue greater professional opportunities. The Crown Prince even announced last week that the Kingdom would be relaxing the strict guardianship laws in place; making it easier for women to leave the country as and when they please.

Further to this, segregation laws and strict dress requirements have also been relaxed in parts of Saudi Arabia.

In Jeddah, for example, these changes are more marked. Some eating outlets have removed the segregated spaces which were once a mandatory part of eating out in Saudi Arabia and it is becoming more common to see some women (albeit very few), showing their hair. 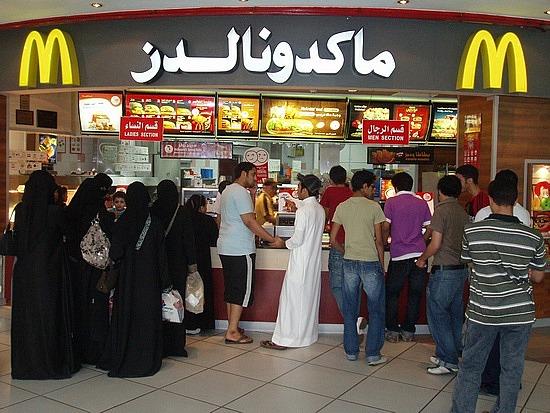 Segragation along gender lines has been publicly practised in Saudi Arabia for generations.

Something the Saudi governement appeared to change.

With the changes introduced by the Crown Prince, one would reasonably expect to see females embracing their new freedoms and female narratives changing.

However, it’s not quite so straight forward as the female situation is not only influenced by the government.

Saudi culture is also heavily influenced by a strict interpretation of Islam and codes of conduct which are embedded in tribal culture.

Coupled with the tribe and Islam is the high value placed on the ‘group’ and ‘honour’. These influences also play a critical role in Saudi culture.

The importance of group and honour in Saudi culture, mean that publicly doing something disagreeable brings shame, not just on the individual, but on the wider group (or tribe in most instances).

As such, although the Crown Prince has said that face veils and headscarves are no longer mandatory, very few women leave home without them – particularly in the more conservative provinces, such as Riyadh. To leave home without properly covering would potentially be considered shameful, a judgement extending to the individual’s broader group.

The value placed on the group also means that people are less likely to want to ‘stand out’ amongst their peers. To leave the house without a niqab, headscarf or abaya, when one’s group are all so attired, would make the individual ‘stand out’, something that group focused cultures are not always so comfortable with.

The Kingdom Mall in Riyadh is an excellent example of the multiple layers of influence within Saudi culture. The top floor of the Kingdom Mall has traditionally been restricted to women only. However, when these arrangements were relaxed by government sanction and access given to men and women alike, the change backfired with profits taking a nose-dive.

Some women working in this previously female only environment left their positions as they were not comfortable serving male customers, and those who had previously worked without covering now felt compelled to cover themselves. Some men also felt uncomfortable about mixing with single females when shopping in case they were accused of trying to ‘pick’ women up.

So, in theory, yes, recent changes have freed women in many ways. However, it’s clear that a change in law does not mean a change in mindset or a change in the culture of a country.

Telling people that they can go and do something doesn’t mean that they will necessarily go out and do it.

As outlined, the layers of control in Saudi Arabia do not stop with the government. They are deeply embedded in religious practices, tribal codes and in the ancient cultural practices of the region.

So are women now any more free in Saudi society?

Ostensibly, and on paper, yes. However, in practice, not really.

Female influences have come from a number of important sources which include the government, Islamic interpretations and tribal codes. So, although the government has accorded women additional freedom, the influence of the tribe and Islamic interpretations do not mean that these changes have been embraced. The importance placed on honour and group have further compounded this.

Simply giving people rights at a governmental level does not necessarily change a situation – although it will certainly make changes more likely. Instead, the changes need to come from bottom up with Saudi society as a whole embracing them.

Take our online cultural awareness course on Saudi Arabia - packed full of useful info for anyone wanting working with or doing business in the country.

Main photo from Tribes of the World of Flickr (CC BY-SA 2.0)