What do I Need to Know About Doing Business in Muslim Countries During Ramadan? Do you work with or travel to Muslim majority countries?

Then you need to know all about Ramadan!

For 30 days’ life gets flipped upside down for most Muslims – this impacts business.

Although travelling during Ramadan isn’t necessarily the best time to be doing business, sometimes needs must.

To guide you, we’ll look at some of the consequences of doing business in the Muslim world during Ramadan and what you can do to prepare yourself.

This will help you overcome many of the common challenges faced by foreigners trying to get work done during the holy month.

DON'T MISS THE FREE SAMPLE OF OUR MIDDLE EAST CULTURE COURSE AT THE END!

Ramadan is simply the name of the ninth month in the Islamic calendar. However, this is no ordinary month; it is the month in which the Prophet Muhammad received his first revelation from the Archangel Gabriel.

The Quran designates the month as a month of fasting. 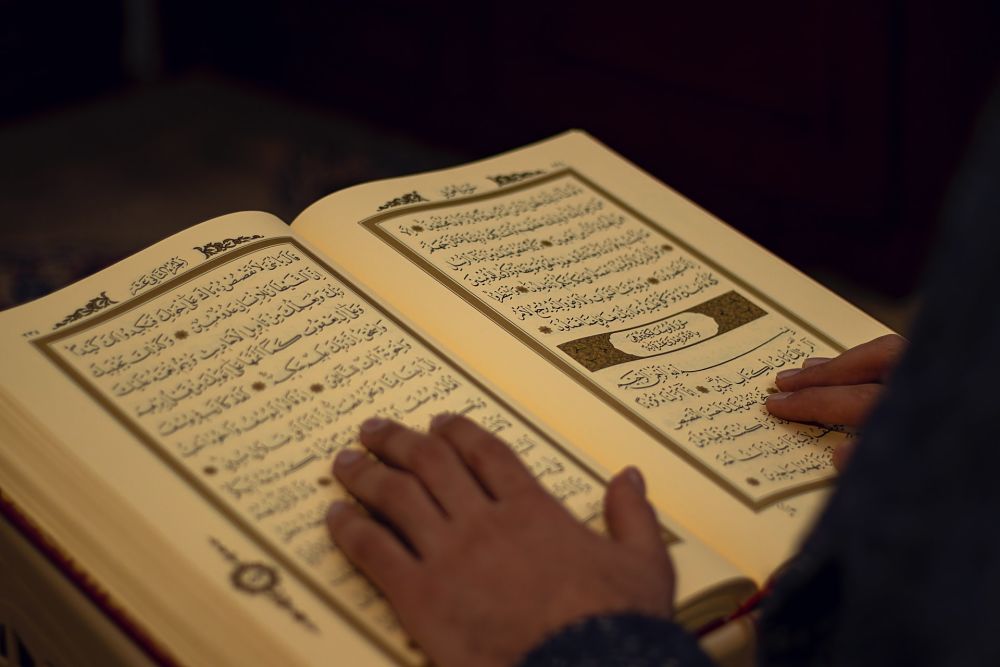 As well as fasting, Ramadan is also a time of the year when people will try to read the Quran from start to finish in order to receive reward from God. Photo by Sohaib Al Kharsa on Unsplash

What does Fasting mean?

At its very basic level, 'to fast' means no drink or water from dusk till dawn however many Muslims see the month as the one time during the year when they try to exert themselves in their religious devotions.

It is important to remember that there is great diversity within Islam and how it is interpreted and practised. Although in Muslim majority countries, most people will be fasting, this does not mean every Muslim will be fasting.

Some simply chose not to fast or may not consider themselves 'religious'. There are also many exceptions as to who can/can’t fast – women who are on their menstrual period, the pregnant, sick, old, those who are travelling and some others do not have to fast. 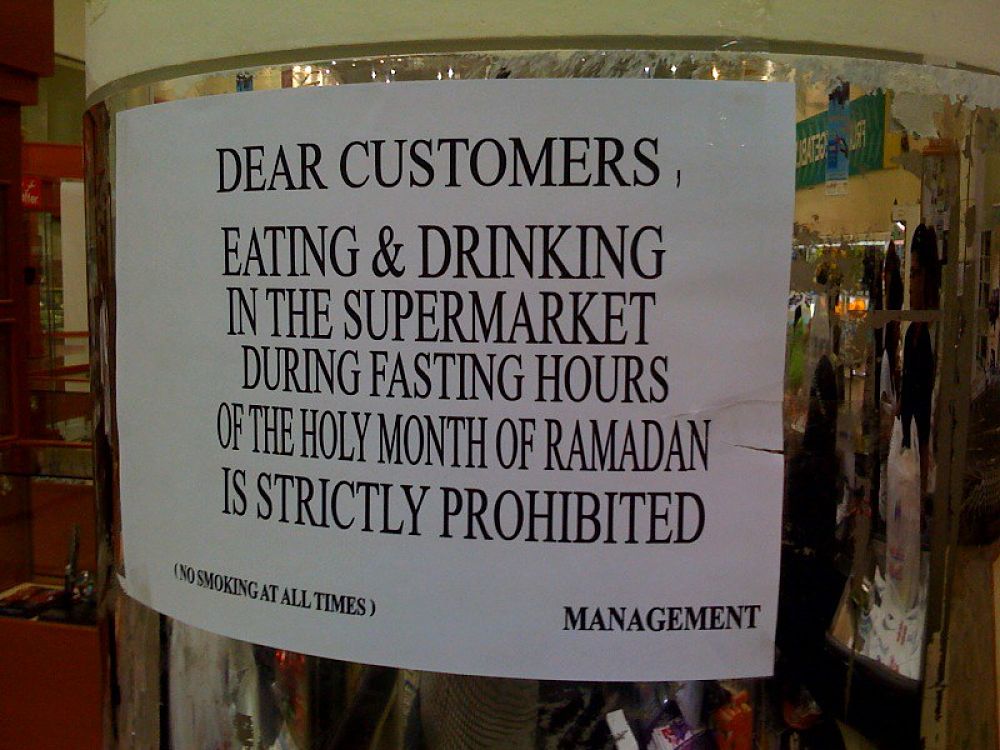 Photo of typical sign you will see during Ramadan, in this case in the Gulf region. Taken by M. Nanabhay (Flickr CC BY 2.0), who comments: "I don't get why people in the Gulf get so offended when non-Muslims eat during Ramadan. I mean, we know they aren't fasting..."

Ramadan is not like New Year’s Day or Thanksgiving. It has no set date as the Islamic calendar is lunar. As a result, the start and end of Ramadan changes every year, usually getting 10 days earlier each year.

Ramadan is only declared the night before as it relies on the sighting of a new moon, signalling the new month. Some countries such as Turkey actually set the date in the calendar, basing their judgements on scientific methods and calculations.

Most however wait for the moonsighting to be officially declared. It can sometimes be the case, as has happened frequently over the past 10 years, that some Muslims start/end Ramadan on different days down to the sighting of the moon in their country or location. 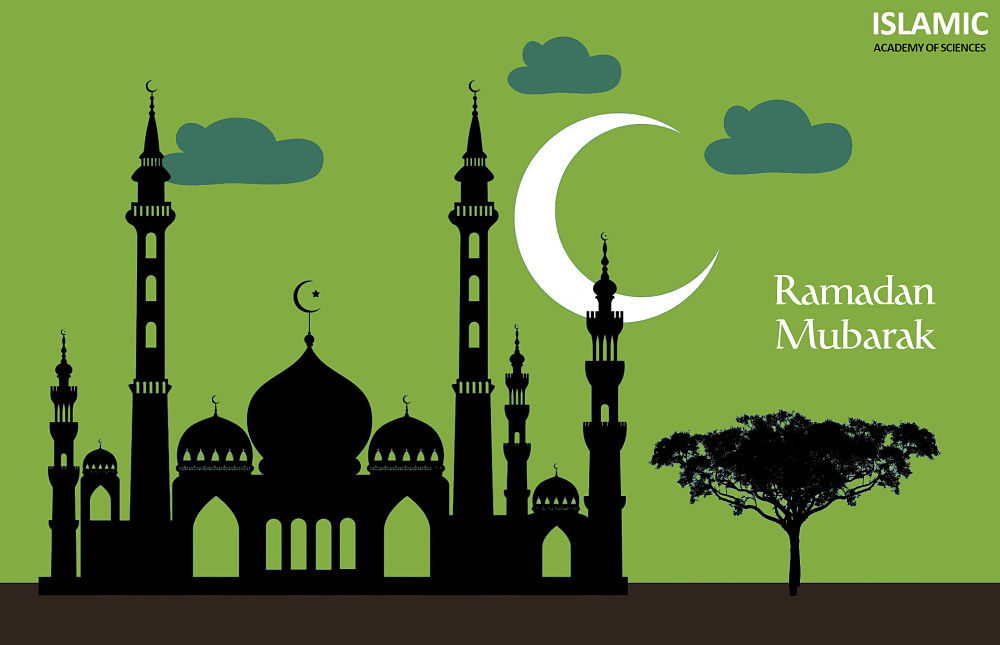 'Ramadan Mubarak' is a congratulatory phrase used between Muslims to celebrate the start of the holy month. Image by Quranic Resources on Flickr (CC BY-ND 2.0).

People wake up very early, usually an hour before the crack of dawn to eat. In many places, you may have something akin to a town crier who walks around the streets banging a drum and calling people to wake and eat. After the meal people will pray, change and then head straight to work.

Work hours change during Ramadan. People start a lot earlier than normal and finish earlier too. In some countries such as Saudi Arabia or the UAE they may work until the noon prayer and then go home for the rest of day, to return to work later at night for a few hours once replenished. In many countries, such as throughout the Gulf region, employees are given great leniency in terms of working hours as it is accepted that this is a month to be concentrating on higher goals.

If you are trying to get work or meetings done during Ramadan, only aim for early mornings and at night once the last prayers have taken place and people generally relax. Trying to accomplish anything during the day is generally fruitless. Most people accept that productivity is going to drop around 30-50% during the month. If you are dealing with the public sector or the government, expect little or nothing as they tend to shut themselves down for the month.

Can I Eat During the Day in Ramadan?

Access to food during the way will differ, depending on where in the Muslim world you are.

In places like Egypt or Iran your only access to food will be some select restaurants in the city and the larger hotels catering to foreigners. In other countries where perhaps there is a large expat community, such as the UAE, or multicultural population, such as Malaysia, you will find many places still open. Some may pull their shutters down, have blinds or cover their windows out of respect.

As a visiting foreigner, you should never be shy or scared about eating/drinking during the day. You are not expected to fast. However, you are expected to show respect when in public by refraining from eating and drinking and during meetings you should not be asking for tea and coffee unless of course, your counterpart is not fasting. 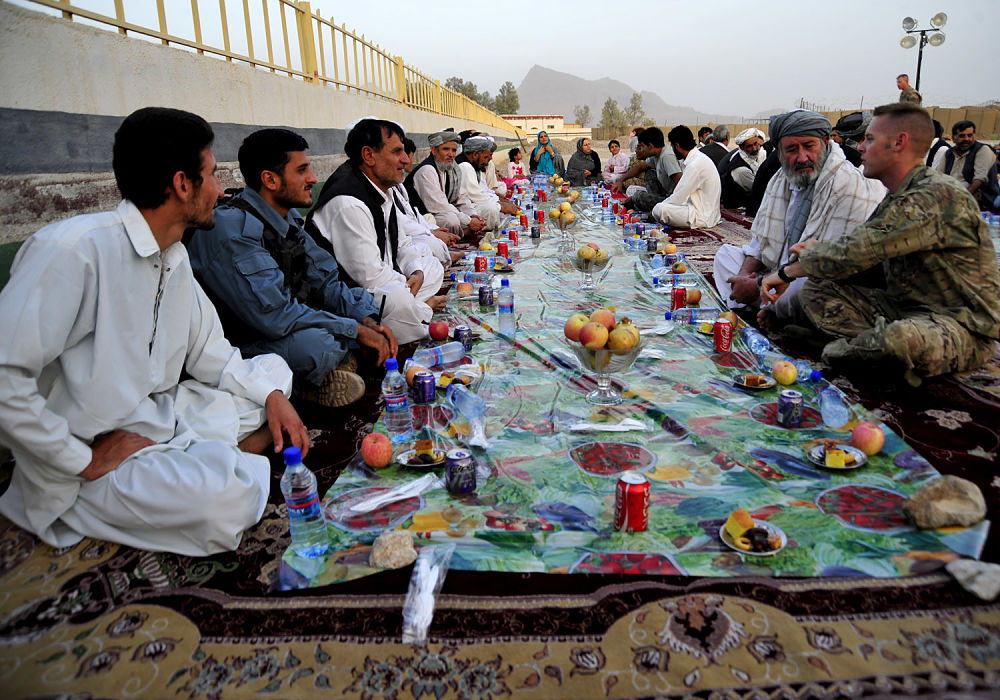 Typical iftar scene, this one from Afghanistan, but very similar across the Muslim world. Photo by ResoluteSupportMedia on Flickr (CC BY 2.0)

About half an hour prior to dusk, people will start to gather to prepare themselves to break their fasts, what is called iftar.

Iftar is a time when people come together rather than breaking fasts on their own – it is a community affair. Outside of mosques, you will see pavements heaving with people looking for places to sit. Food and water is usually laid out and people find their places and wait. Businesses often put on iftars for their staff and clients during Ramadan which can be very glitzy, glamorous affairs. At homes families and neighbours will tend to come together to break their fasts and share food.

If invited to an iftar – go! Relationship building is essential to doing business in the Muslim world and attending an iftar is a great way to develop that. If attending a house, it is a good idea to bring some dates, fruit, cakes or something else sweet. If attending a business iftar, there is no need to take anything. Sit with your hosts and wait patiently for the call to prayer – as soon as it starts you will see people lifting their hands, saying a prayer and then tucking into their food. Once they have eaten, they will usually slip away to pray the dusk prayer and then return for more food. 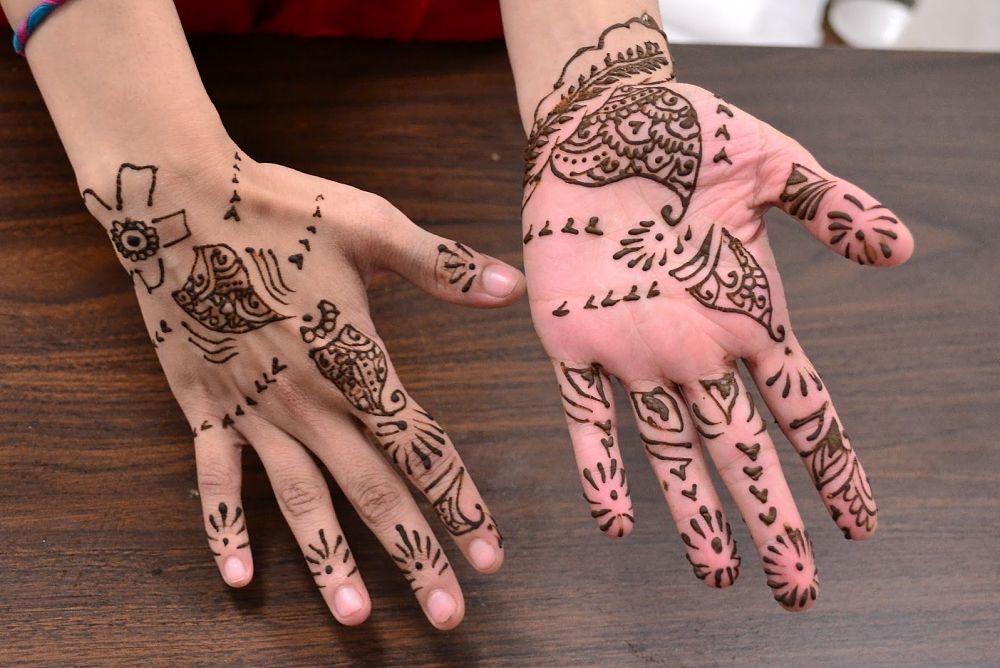 A young lady shows off her henna designs, freshly painted to celebrate the start of Eid ul-Fitr. Photo by orangefan_2011 on Flickr (CC BY 2.0)

What is the Eid Holiday?

The end of Ramadan is marked by the biggest celebration in the Islamic calendar – Eid ul-Fitr, or Eid for short.

Eid is to Muslims what Christmas is to the Western world. It is a day of joy, a day of presents, eating a lot of food, visiting family and neighbours and distributing food to those who need it.

Eid can last anywhere from 3 days to 10 depending on which country you are in. Nothing happens – it is total shutdown.

WANT MORE INSIGHTS INTO DOING BUSINESS IN THE ARAB REGION?

Then why not take our online course on the Middle East?

You can watch a sample of the course video here or on the course page where you can also download some free course resources!

Photo by Katerina Kerdi on Unsplash