Culturally speaking, how easy would you say it is to do business with the UK?

Well the Business Culture Complexity Index ™ (BCCI), which assesses the potential complexity of a country's business culture, has just the answer!

The BCCI utilises a broad range of current data sources to produce a single score around the relative ‘ease of doing business’ for each of the 50 economies of the world.

The BCCI Ranks the Brits as 'Green' (bordering 'Amber')

With the BCCI ranking the UK at 12th position for business complexity and ease of doing business, it’s certainly not the most complex country on the list.

However, it’s also not the easiest.

If were to colour code the UK on a traffic light system, we’d code it as green, although it's very close to being an amber. 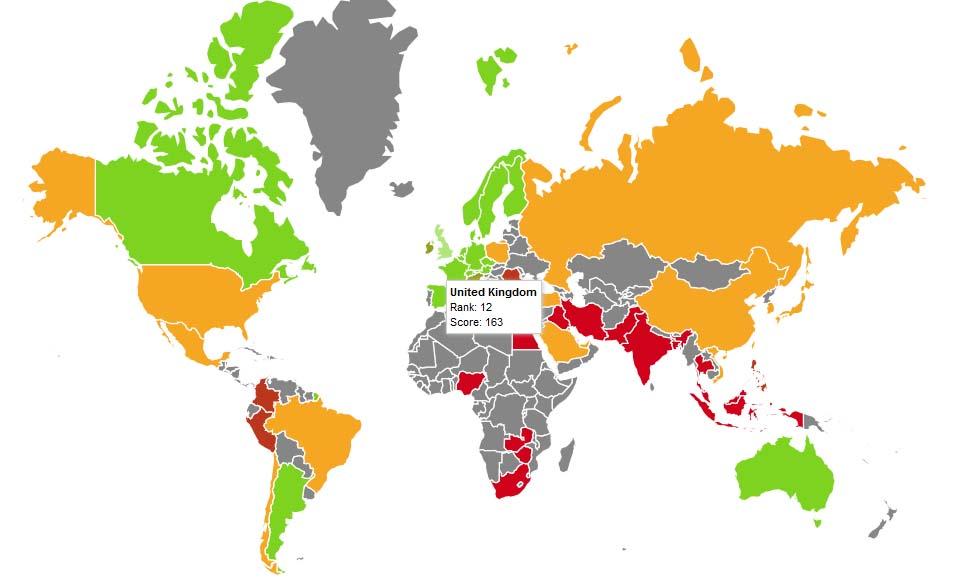 So, without further ado, let’s break this ranking down by looking at some of the key metrics included in the index...

The UK is ranked 27th on trust scores, making it a comparatively sceptical country.

From a business perspective, this is important as trusting countries are likely to be far more open to relationships with unknown entities. Feeding into this score is the general observation that British people may be put out by people who are too familiar too quickly. For those coming to the UK, it’s important to take time to build trust before being too ‘friendly’ in the relationship.

The UK is ranked 44/50 on corruption scores, (with 1 being the most corrupt and 50 being the least corrupt) making it a fairly corrupt free country.

On a business perspective, this is a good thing. It means that those considering expanding into the UK will find things fairly transparent and open. Bribery is viewed upon with suspicion and generally not considered an acceptable part of British culture.

This score suggests that businesses and individuals in the UK have the right to enter markets and to compete in them, coupled with the freedom to pursue business and entrepreneurial opportunities and to act on them. This measure also correlates with other positive factors, which should be reassuring to businesses considering expanding into the UK. Economic Freedom also correlates with higher literacy levels, higher life expectancy, lower corruption and lower infant mortality.

Scoring 39/50, the UK has a fairly egalitarian business culture.

This will means that those considering expanding into the UK from equally egalitarian countries will find the nature of business easier to interpret and navigate. Unlike countries, such as China, who score poorly on egalitarianism, the UK formality and hierarchy don’t play so important a role.

So we can conclude that the UK is a fairly transparent, open and affluent culture in which to do business.

British businesses generally have the freedom to do business with people of their choice and without barriers. The system is generally corrupt free and formal business protocols seen elsewhere are generally not a part of British culture.

If you want to find out more about the BCCI data then click here.

For more information on British culture, then click here to read our insightful and practical UK Culture Guide which is jam packed full of tips and suggestions.

For those that need to explore UK business culture in more detail then click here to enrol in our comprehensive onine UK culture course which is aimed at professional staff coming to the UK for business.

Alternatively, if you would prefer 'live' webinar  training with on of our specialist UK cultural training staff, then click here.

You may also find the following blogs useful:

What should all Expats know about the UK before Relocating?

*The data assumptions take a western centric position. Countries neighbouring the UK, or countries which share common cultural characteristics and preferences are likely to find British culture and business far easier to navigate than someone from the say China, Japan or South Korea.