Visiting Japan for business or working with Japanese colleagues?

Then put your best foot forward and make a great impression by understanding Japanese business culture!

Japanese culture can be very alien for some people.

So the more awareness you have around the way people prefer to do business, the better prepared you're going to be.

To help you, we'll be taking a glimpse into the unique Japanese business environment and explore some tips for foreigners doing business with the Japanese.

If we were to describe Japanese business culture using just a few words, we would opt for

This means that there’s a certain way to do, (and not do), things in the workplace. 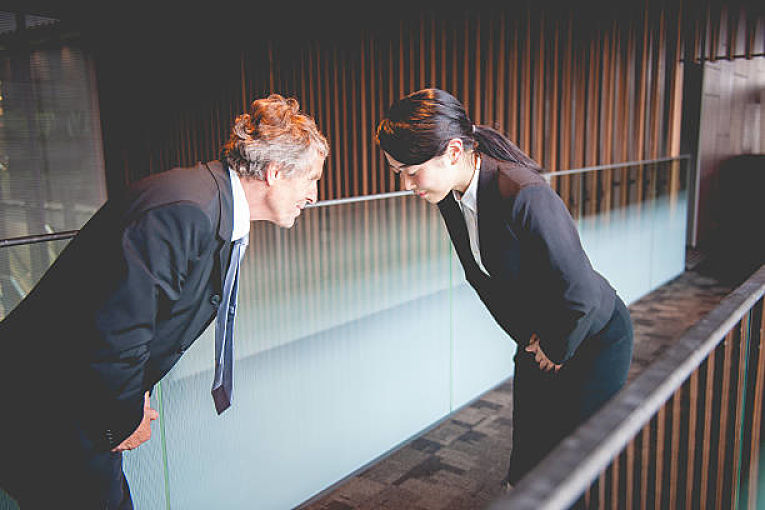 The bow is all about showing respect, preserving hierarchies and maintaing social harmony - all fundamental values in Japanese culture.

2. One of the most iconic expressions of Japanese formality is the bow which is strongly linked to hierarchy.

Try and get this right without confusing the natural order. If for example, you go into a restaurant and return a bow lower and longer to the waiting staff, they will be obliged to repeat their bow to make it lower than yours and to hold it for longer than you did.

There is a way to dress, and most people stick to this by wearing simple black, grey or navy suits and avoiding colours which might otherwise make them stand out from the crowd. Japan places a great deal of value on the ‘group’, meaning that individualistic behaviours are not encouraged. If you walk through Tokyo during commuter rush hour therefore, it’s unlikely you’ll see people wearing bright socks, coats or elaborate hats!

4. As we’ve mentioned, Japanese business culture is very hierarchical. Everyone has their place and knows their role.

Deference and authority are shown, and expected, where due. When you’re in Japan therefore, you need to respect the order of things. As a crude example, if there’s a secretary in place with responsibility for printing documents then don’t go and starting printing yourself as this may undermine the secretary and people may well question why you would do a job beneath your status. Demonstrating hierarchy in meetings and negotiations is also important.

5. We mentioned ‘harmony’ as a quality of Japanese business culture.

This feature is a product of the importance placed on ‘face’ in Japan. You’ll probably find it’s one of the most challenging cultural values that you come across when you’re in Japan. Why? Because Japanese people won’t always tell you what they think They may lead you to believe one thing, but actually mean something a little different. 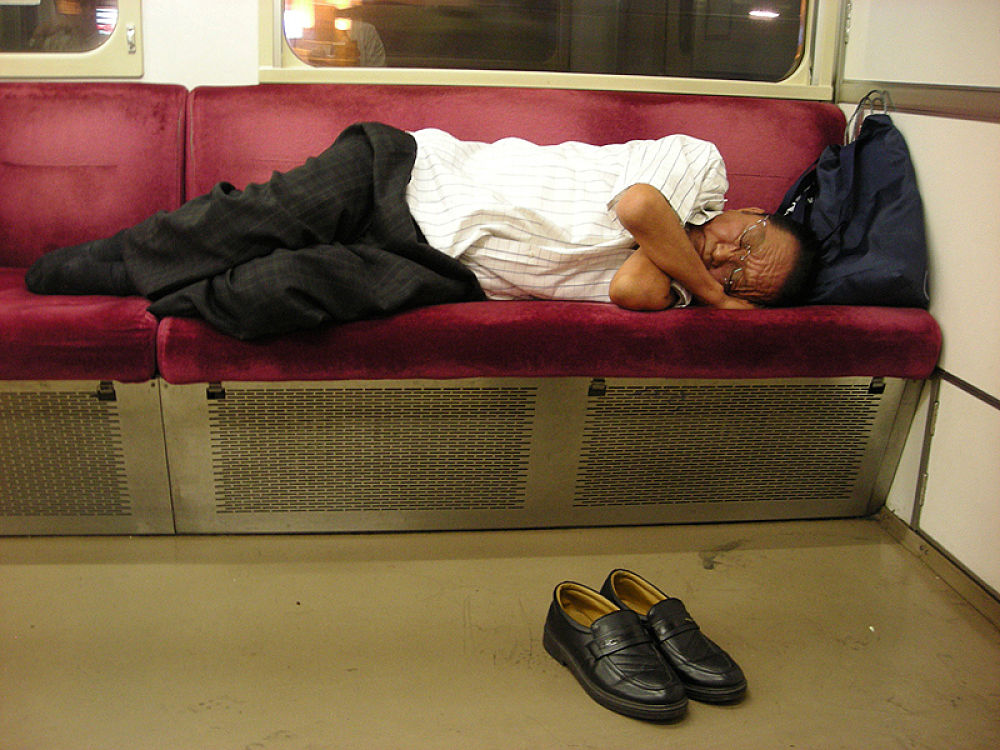 Have you heard of nominication? It's a uniquely Japanese means of using aiding communication between colleagues through the use of plenty of alcohol! The result is usually a lot of sleepy people on public transport at the end of a night. Note how, even when drunk, shoes are not put on the seats - an important part of Japanese etiquette.

6. Face, or Mentsu in Japanese, is very important to understand.

You’ll find therefore, that people rarely show public displays of anger as this would cause both themselves and the recipient of their anger to lose face. It’s not to say it’s not expressed in a different way, but on the whole, people speak to each other calmly and respectfully to protect harmony within the workplace. Silence is also a big part of the communication style.

You may be told ‘yes’ to something when, in fact, the speaker means ‘no’. This isn’t intended to deceive you as the speaker will expect you to also consider some of their contextual and upspoken cues. Take the time therefore to look at the broader context, take note of body language and, if you’re really confused, then tell someone and ask them to be more direct with you.

8. When it comes to loyalty, the business culture in Japan is incredibly loyal.

This also transfers to suppliers and business relationships, so if you’ve managed to invest sufficient time in building trusting relationships with your counterparts, then you’re likely to be rewarded by their loyalty. It’s unlikely that they will want to change suppliers as easily as they might in the west.

You may also be aware of the ‘salary men’ in Japan. This concept is a clear expression of the value placed on loyalty in Japanese business culture. Salary men are essentially white-collar workers, recruited into their role upon graduation. They then typically remain with their employer for life until they are of pensionable age.

How to Summarise Japanese Business Culture

Take a Professional Course on Working with the Japanese

If you're working with Japanese peers, then give yourself a competitive edge by developing an essential understanding of Japanese business culture.

Trusted by multinationals the world over, our comprehensive online and eLearning Japanese cultural training course is a must have for professionals.