Danes have every reason to celebrate! The Business Culture Complexity Index™ has ranked Denmark as having the easiest business culture among the top 50 economies of the world.

Let’s discover how this tiny western European country, famous for Lego, butter, bacon and Carlsberg beer, has created a culture, that according to the data, is open, trusting, transparent and open for business!

In this blog, we’ll look at the statistics and explain how Denmark managed to top the Business Culture Complexity Index™ 2019 Table.

The BCCI uses data to assess the potential complexity or ease of a country’s business culture.

It scores the business cultures of the top 50 economies of the world according to a specific algorithm created in conjunction with a team of mathematicians.

The algorithm pulls on 14 different sources covering social, cultural and economic data from sources such as Pew Research, The UN and the World Bank and academic research into cultural differences carried out by Schwartz.

The scores are presented using a league table and world heat map. For 2019, Denmark was ranked the easiest, Nigeria the most complex. 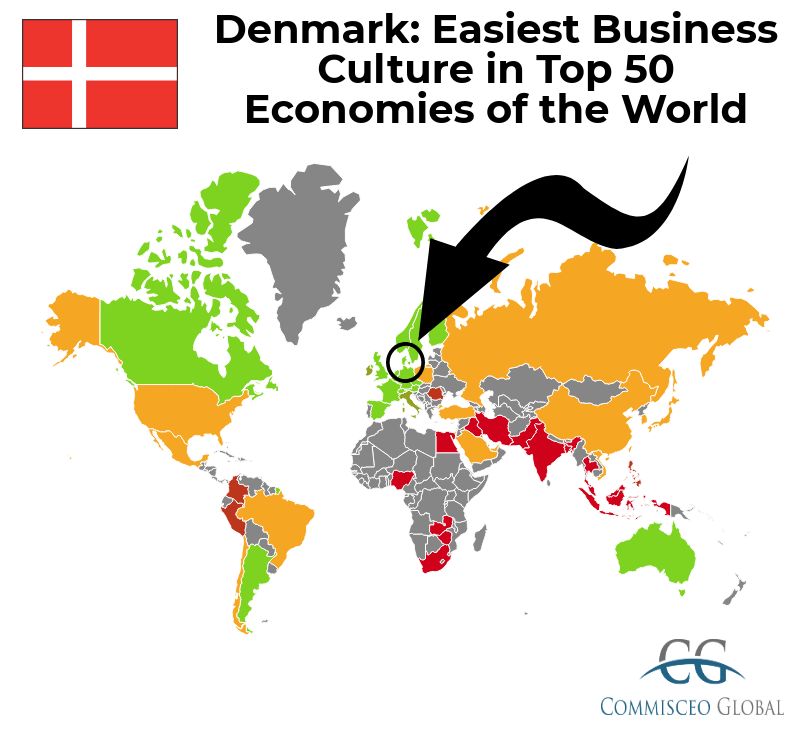 So, Why Danish Business Culture?

To understand how the Danes managed to top the table, let’s look at the data and see what it might be able to tell us about the business culture.

The BCCI’s algorithm pulls from the following 14 data sources. If you would like to, you can also download the raw data here.

• This set of data measures levels of interpersonal trust around the world.
• An impressive 66% of Danes believe people can be trusted, making them the most trusting people in the world.
• Trust is a cornerstone of Danish culture, and this follows through into the business culture where people take things at face value.

• This data from the World Happiness Report measures the levels of happiness within a country.
• Danes are among the happiest people in the world (7.6) ; only the Finns are happier (7.7).
• Danish society and culture are socially conscious, meaning that priority is given to basics such as standards of living, food, leisure, etc.

• This data measures the levels of internet penetration within a country.
• Denmark, for 2019, has reached an impressive 96.96% internet penetration rate which helps account for its status as one of the most digital countries in the world.
• This signals a business culture where time, transparency and convenience are prioritised.

• This data from Pew Research measures the levels of religiosity within a country.
• Denmark was among the lowest-scoring countries in this regard meaning Danes are not very religious at all.
• Countries in which religion and religious identity are important usually mean they are much more group orientated, i.e. they are much more difficult to penetrate. Denmark on the other hand does not have these religious/group binds.

• The EODB data uses multiple data sources to come up with its own score as to how easy it is to do business in a country (practically speaking).
• For 2019, Denmark was ranked the 3rd easiest country in the world to do business. It's also the easiest place in Europe.
• The data points to a commercial culture based on the principles of freedom and ease, as opposed to laws, red tape and control.

• The Index of Economic Freedom measures 12 sets of information around personal, social and economic freedoms.
• For 2019, Denmark was ranked 3rd in the league table, reflecting the points above around ease of doing business
• As per above, this points to a healthy commercial environment underpinned by a culture that values liberty.

• Transparency International’s Corruption Index measuring the perceived corruption in a country’s public services.
• Denmark ranked the highest – meaning its population believe they have the least corruption in their society.
• A commercial culture in which corruption barely features, usually points to an open way of doing business, in which contracts, laws and agreements govern how things get done, as opposed to who you know and having to get around bureaucracy.

• Reporters Without Borders measure the amount of freedom granted to the press and media.
• Denmark had one of the best scores, only beaten by other Nordic countries surrounding it.
• A free press is linked to a free society and a free society to a culture in which personal freedoms and liberties are prioritised; this extends into the business culture too.

• The HDI measures factors such as standard of living, education and life expectancy in a country.
• Scoring 0.929, Denmark is within the top bracket of countries where the general standards of living are high for the population.
• This points to a society in which public services, employment, health care, etc are functional and take the human experience seriously.

• Tracked by UNTWO, this data captures the number of tourists that visit a country.
• In 2019, Denmark had 10,781,000 tourist arrivals – not huge numbers, but remember it’s a small country!
• What this shows is that the Danes are used to dealing with foreigners; their business culture is well exposed to the outside world.

• Official literacy rates of literacy within a country, give us an idea about levels of education.
• Denmark has a 99% literacy rate.
• An educated population, well-informed and culturally-skewed towards data, logic and reason.

• This ranks how important the country is within the global economy.
• Denmark ranked 37th, which for a small nation is impressive.
• Danish business is clearly doing something right in order to be among the top 50 economies of the world.

• This data which has more of a cross-cultural aspect to it measures how group orientated a country is.
• Denmark scored 3.19 which is on the low side, meaning they are not a very group conscious culture.
• Danish business culture is, therefore, a bit more ‘open’ in that there is less of a sense of outsider/insider in terms of how business gets done and who by.

• This data draws on the same research as above (Schwartz) and measures how much emphasis is placed on independence and equality within a country.
• Denmark scored 5.03 making it one of the least hierarchical countries, i.e. these are a people that really stress an ‘everyone is equal’ doctrine.
• In terms of the business culture, we see this expressed in the very flat organisational structures, which again make it that little bit more ‘open’ than in other cultures where hierarchies govern how, when and where things get done.

Is Danish Business Culture the Easiest?

It’s all relative and depends on your own culture. What is easy to one culture, may be a nightmare to another and vice-versa.

• The data shows that the Danes are very trusting of others, with one of the highest trust scores.
• As a society they are one of the happiest, pointing to a well-functioning country that looks after its citizens, provides jobs, welfare, etc. This is also reflected in Denmark’s scores in areas such as the Human Development Index.
• The lack of religiosity perhaps points to a more open culture when it comes to dealing with outsiders and a less collective and protective approach to business and commercial relationships.
• Scores for Ease of Doing Business, Economic Freedom, Press Freedom and Corruption are excellent, again pointing to a more transparent commercial environment providing minimal barriers to entry.
• Culturally speaking, the data points to an egalitarian culture, where hierarchies are relatively flat, perhaps reflected in its to relatively relaxed business culture.
• Denmark’s leaning towards individual responsibility explains the greater emphasis placed on values such as rule of law, fairness and equality which in themselves are also expressed in the way business is done.

Want to learn more about Danish culture? Visit out Denmark Country Profile which includes a section on business culture and etiquette.