A Brief Introduction to Shinto Want to learn about the religion of Shinto?

Well, we're going to give you a great into to everything you need to know!

Shinto is regarded as the religion indigenous to Japan and is thought to predate all reliable historical records.

Literally translated the word 'Shinto' is composed of two words from the original Chinese, Shêntao.

'shin' means gods or spirits and 'to' means the philosophical way or path.

Shinto has no fixed dogma, moral precepts or sacred scriptures but many shrines ('jinja') around the country which have often been bases of power with ties to Imperial and Shogunal rule throughout the ages.

Shinto followers worship a huge array of 'kami' (gods or spirits) which personify all aspects of nature, such as the sky, the earth, heavenly bodies, and natural phenomena.

Sacred objects, such as rocks or trees, can be recognized by the shimenawa ropes and white paper strips attached to them.

Many of the festivals held all over Japan originate from Shinto rites, including prayers of thanksgiving, offerings of food and valuables and purification rituals.

What are the Origins of Shinto?

The origins of Shinto are hidden in the mists of time.

According to the historical chronicles of ancient Japan (AD712), the sun goddess Amaterasu Omikami presented the Imperial Regalia to her grandson, Ninigi no Mikoto. The Imperial Regalia (sanshu no jingi) are holy relics which appear in Japan's ancient myths. In order of importance, they consist of the sacred mirror, the sacred sword and the curved jewels, all stored in separate specific shrines. They are the symbols of the legitimacy and authority of the emperor. He in turn is meant to have passed them on to his descendants, the emperors, the first of whom was Emperor Jimmu.

Shinto only received an actual name and became in any way systemized in the late 6th century AD, in order to distinguish it from Buddhism and Confucianism, newly introduced from China.

In the late 8th century, under the great teacher Kukai, Shinto and Buddhism were united as a new doctrine called Ryobu Shinto (the Shinto of two kinds).

From 1600 to 1868, known as the Edo Period, there was a revival of nationalistic sentiments. One result was a resurgent interest in the ancient Shinto beliefs, and the discarding of foreign influences. In 1868, the emperor was restored to the head of the government and Shinto was established as the state religion.

Buddhism was outlawed, in an attempt to purify Shinto by abolishing many Buddhist and Confucian ideals. The emperor was considered the divine descendant of the sun goddess. This direct lineage from the gods was reflected in a feeling of Japanese superiority, which in turn fed the military expansion of the Japanese Empire. State Shinto was considered the official belief of the entire Japanese race. 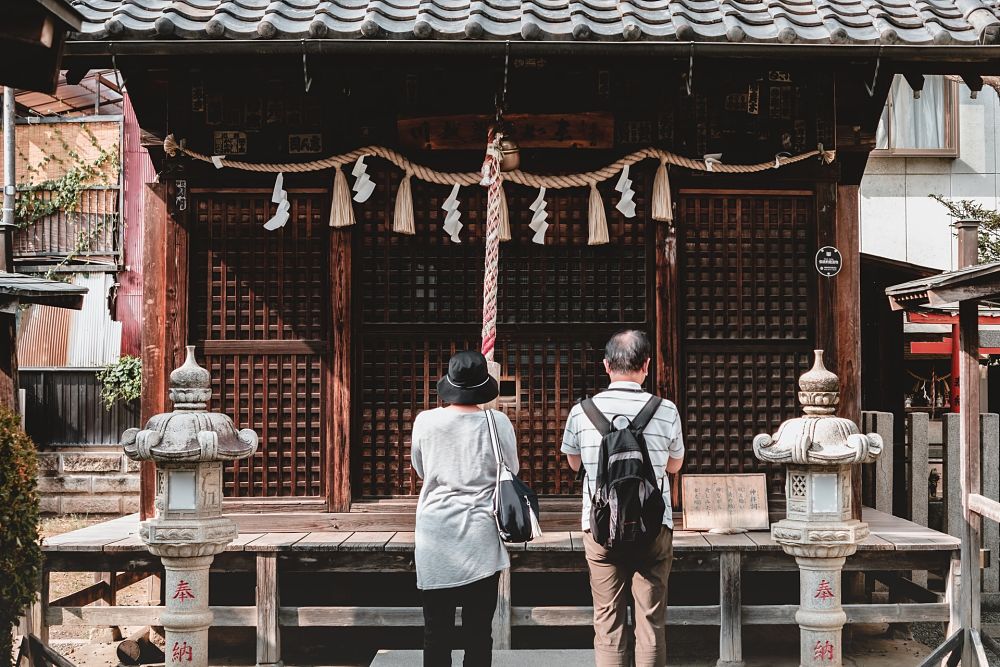 Worshippers at a Shinto temple in Kawagoe, Saitama (Japan).

Photo by Kentaro Toma on Unsplash

In 1871, a Ministry of Divinities was formed and Shinto shrines were divided into twelve levels with the Ise Shrine (dedicated to Amaterasu, and thus symbolic of the legitimacy of the Imperial family) at the peak and small sanctuaries of humble towns at the base. The following year, the ministry was replaced with a new Ministry of Religion, charged with leading instruction in "shushin" (moral courses).

This was a major reverse from the Edo period, in which families were registered with Buddhist temples, rather than Shinto shrines. Priests were officially nominated and organized by the state, and they instructed the youth in a form of Shinto theology based on the official history of divinity of Japan's national origins and its Emperor.

As time went on, Shinto was increasingly used in the advertising of nationalist popular sentiments.

In 1890, the Imperial Rescript on Education was issued, and students were required to ritually recite its oath to "offer yourselves courageously to the State" as well as protect the Imperial family. The practice of Emperor worship was further spread by distributing imperial portraits for esoteric veneration. All of these practices were used to fortify national solidarity through patriotic observance at shrines. This use of Shinto gave Japanese patriotism a special tint of mysticism and cultural introversion, which became more pronounced as time went on.

Such processes continued to deepen until the Sh­õwa period, when State Shinto became a main force of militarism, finally coming to an abrupt halt in August 1945 when Japan lost the war. On 1 January 1946.

Shinto in the Modern Era

After World War II, the Allied Occupation separated Shinto and the state and this break was written into the new constitution.

So visits by leading politicians to Yasukuni Jinja, which enshrines the Japanese war-dead, are always protested as being provocative by Japan's Asian wartime foes. The emperor issued a statement renouncing all claims to divinity and the use of Shinto symbols for nationalistic purposes was forbidden.

Even today, protests against these and other changes are a favorite rallying call of right-wing extremists. 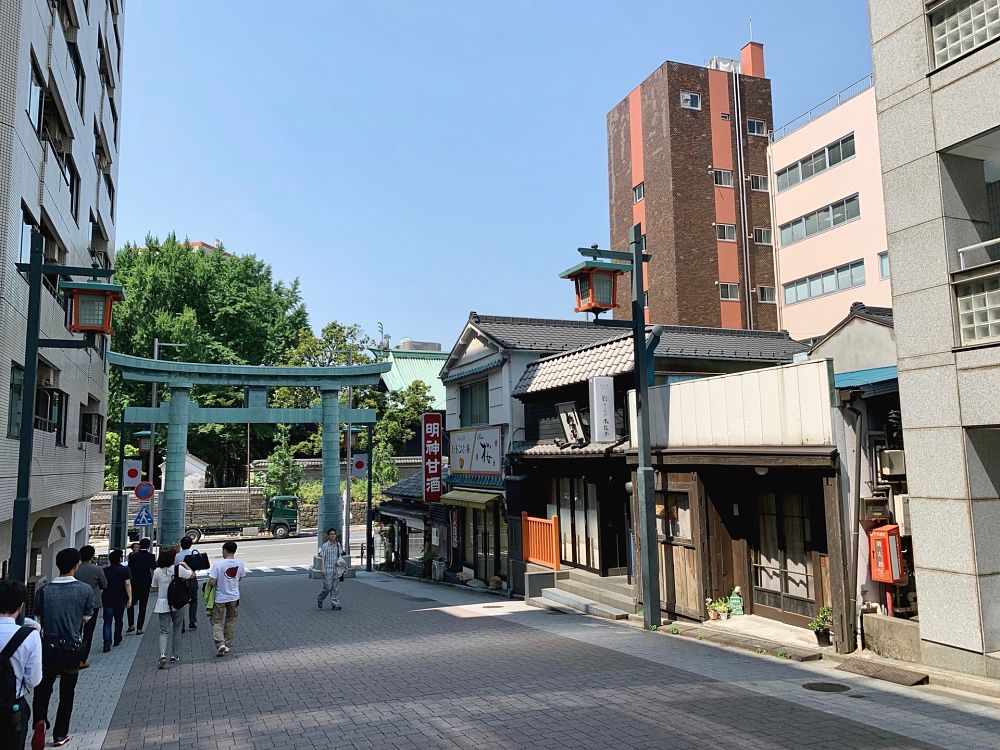 Photo of the main entrance of the Kanda Shrine located in Chiyoda, Tokyo, Japan. The shrine dates back 1,270 years, but the current structure was rebuilt several times due to fire and earthquakes. It is situated in one of the most expensive estate areas in Tokyo. Kanda Shrine was an important shrine to both the warrior class and citizens of Japan, especially during the Edo period, when shōgun Tokugawa Ieyasu paid his respects at Kanda Shrine.

Photo by Xtra, Inc. on Unsplash

In addition to the hundreds of festivals, many Shinto ceremonies play an important part in modern daily life.

Many marriages are carried out in shrines, building plots are purified and sometimes even new cars are blessed for safety. In a rite called oharai, the white-clad priest waves a stick with white strips of paper attached to carry out the blessing.

Most family homes have a kamidana (god shelf) as well as a Buddist butsudan (Buddha altar). The main teaching centers for Shinto priests are Kokugakuin University in Tokyo and Kogakukan University in Ise.

Are there Different Shinto Sects?

Despite its many diffuse forms, some sources find it helpful to distinguish three types of Shinto practice. These in turn have given birth to many diverse schools and sects since medieval times to the present day.

1) Shrine Shinto is the oldest and most prevalent of the Shinto types. It has always been a part of Japan's history and constitutes the main current of Shinto tradition.The Association of Shinto Shrines oversees about 80,000 shrines nationwide.

2) Sect Shinto is comprised of 13 groups formed during the 19th century. They do not have shrines, but conduct religious activities in meeting halls. Shinto sects include the mountain-worship sects, who focus on worshipping mountains like Mount Fuji, faith-healing sects, purification sects, Confucian sects, and Revival Shinto sects. Konkokyo­, Tenrikyo­, and Kurozumikyo­, although operating separately from modern Shinto, are considered to be forms of Sect Shinto.

3) Folk Shinto includes the numerous but fragmented folk beliefs in deities and spirits. Practices include divination, spirit possession, and shamanic healing. Some of their practices come from Taoism, Buddhism, or Confucianism, but most come from ancient local traditions.

The religion is thought to be practiced by about 60 million people.

Photo by Beau Swierstra on Unsplash