A Brief Introduction to Jainism Welcome to our quick intro to the religion of Jainism.

In it you'll learn some of the basics around the religion.

This will include some of the history, beliefs and practices.

Jainism is an ancient religion, which originates from Eastern India.

However, due to immigration, Jains now live all over the world meaning it has become a global religion!

What's the History of Jainism?

Its advent in the 6th century BC was in reaction to the hierarchical organisation and formalised rituals of Hinduism, the dominant religion in India.

The word Jain is derived from Jina, which means the one victorious over the self and the external world.

The Jinas are regarded more respect than the Gods. They include the 24 Tirthankaras or ford-finders (holy men), the last Tirthankara Mahavira (599-527 BC) is the founder of Jainism.

The sacred texts for Jains are the compilation of teachings of Mahavira written in Sanskrit.

After Mahavira’s death, a schism occurred between the Jain community and two major sects were formed: the ‘Schvetambara’ and the ‘Digambaras‘.

This schism was caused due to a disagreement regarding the monastery discipline: the Schvetambaras believed that the monks and nuns should wear white robes, but the Digambaras believed that just like Mahavira the monks should wander naked and that a female cannot be a nun because she cannot attain liberation. This led the Schvetambaras to exclude the Digambaras from the orthodox Jain council.

There are around 4,000,000+ followers of Jainism with the majority population based in India some Diaspora populations in the UK, USA, and Europe. However, it should be noted that many of Jains are misreported as Hindus due to similarities in their core beliefs.

The Jain community remains very isolated from other communities. Nevertheless, they are one of the wealthiest communities in India and most influential in the finance and business sectors. 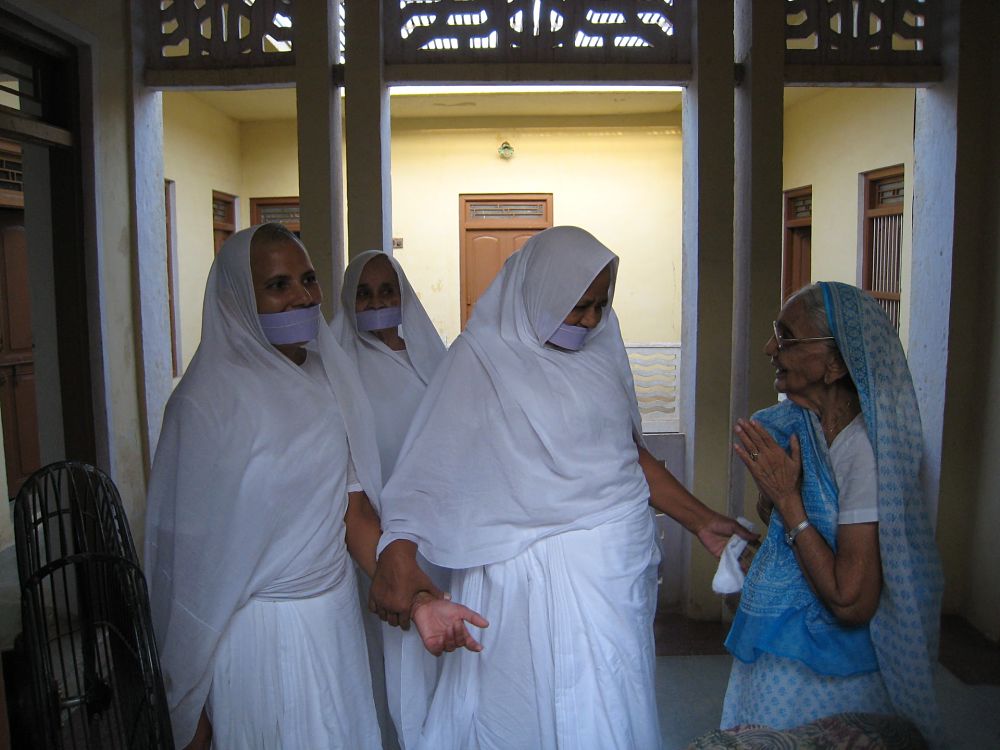 Sadhvi Pramukha (head nun of the Jain Shvetambar Terapanth tradition) is welcomed to the home of a follower.

Photo by Sanjeev Bothra on Unsplash

What are the Beliefs in Jainism?

It is a core belief to conquer all temptations and inner enemies such as anger, greed and pride by practicing non-attachment with the material world and by living a peacefully disciplined lifestyle.

There is unique emphasis on non-violence or ahimsa. Hence, the word ahimsa is found on the Jain symbol of the open palm meaning ‘stop’. Although non-violence is a common practice in most religions, Jainism is unique in extending this principle to all living beings or jivas on earth which include soil, oceans, microbes and plants.

Therefore, Jains have a strict diet and only eat by-products of the living beings such as fruits, nuts and milk. Some Jains wear masks over their mouths and nose to avoid harming microbes by inhaling them, which will result in unwanted karma.

Karma is the natural moral law of the universe in which every good and bad action has a corresponding effect on the doer. Jains believe that karma determines their rebirth form- good karma results in a higher spiritual and favourable physical form and conversely bad karma has adverse results. 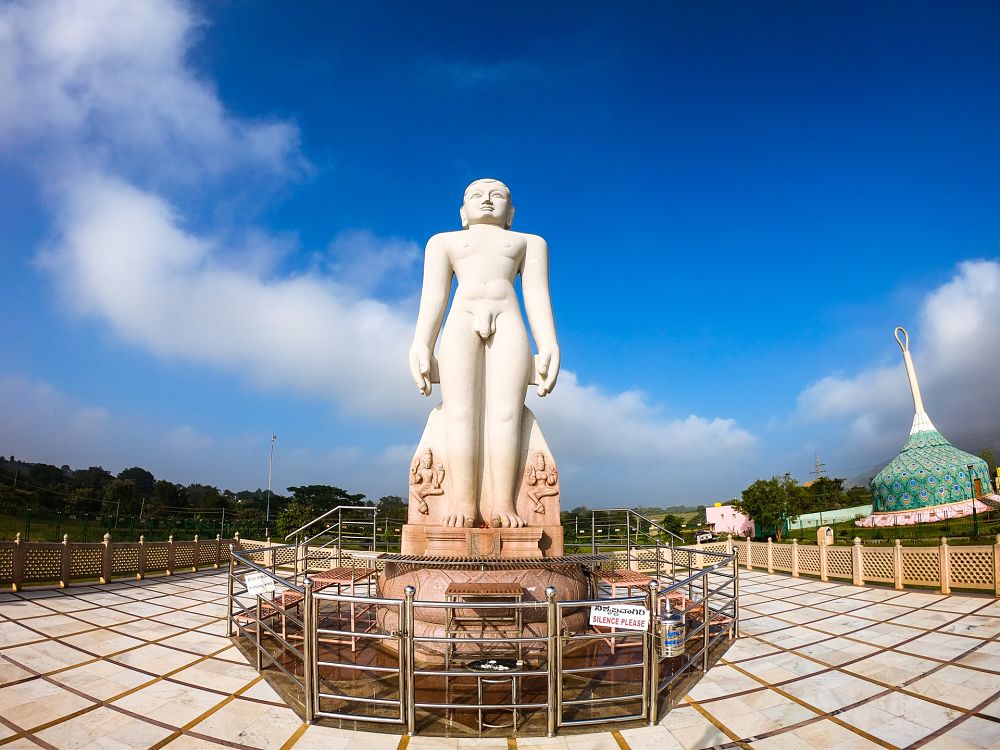 Photo by Travel Nomades on Unsplash

Do Jains Believe in an Afterlife?

In Jain thinking, a jiva is a soul, which is attached to a body.

The soul is of flexible size i.e. the same soul can fit inside a cat’s body as a human’s. The Jain scriptures state that there are 8.4 million species of jivas. The soul is also uncreated, eternal and has infinite power and knowledge and therefore has the inherent potential of divinity.

There are five levels of human development:

The purpose of life is to attain moksha (salvation from the cycle of rebirth) by ridding oneself of the karma, which obstructs the soul.

One can achieve this by living a life of harmlessness and renunciation in the human form and by causing no harm to any sentient being. If one does not achieve moksha, after death the soul will be reincarnated or will suffer punishment in hell.

Hell has 8 levels (each level become progressively colder). Suffering in the hells is not eternal; after punishment the soul is reborn in another form. There are different levels of Heaven also.

Jains are polytheists and pantheists as they believe that every living being has a potential to become God - they believe in reincarnation and seek moksha, once a soul is liberated its is worthy of being labelled a God.

However, Jains reject the notion of a creator and do not believe that any external Being can help the soul. This notion has led some to consider Jains as atheists.

According to Jain cosmology, the universe and everything in it is eternal. Nothing that exists now was ever created, nor will it be destroyed. The universe consists of three realms: the heavens, the earth and the hells. 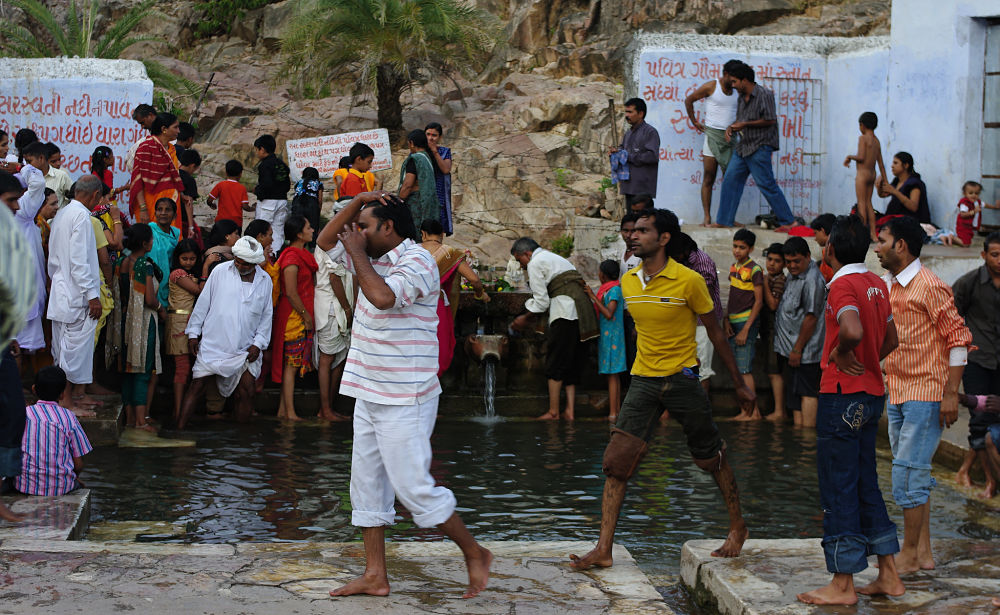 According to some, as many as 14,000 monks and 36,000 nuns were part of the Jain monastic community by the time of Mahaviras death.

Monks and nuns strictly adhere to an ascetic lifestyle and take the "Five Great Vows" which are:

Jain monks and nuns must also observe other practices such as not eating in front of a layperson, not wearing shoes, not staying in one place for a prolonged period of time, shaving their heads and nuns must always where white clothes.

How do Jains Worship?

Worship is done to ask the Gods for their assistance in the journey to liberate the soul.

This worship mainly takes place publicly at stone temples or at home at wooden shrines resembling the temple. The worship involves chanting of mantras and puja (gazing at images of the Gods).

The temples range from very intricately designed and structured to very simple ones and the two largest divisions of the religion decorate their temples in different ways.

Top photo of Jain monk by Sanjeev Bothra on Unsplash