A Brief Introduction to Islam

May 01 Posted by Culture Vulture in Cultural Diversity Did you know that the word 'Islam' means submission to Allah’s will?

A 'Muslim' is one who submits to Allah’s will and, as a result, is at peace.

Islam is a simple religion, although from the outside it can sometimes appear confusing.

That's why we're going to give you a quick-fire intro to the religion.

You'll learn the basics about the history, beliefs and practices.

Islam is the name of a religion established by the Prophet Muhammad. One who believes Islam is called a Muslim.

Islam teaches that God, Allah, created the heavens and the earth. Mankind has been created in order to come to know Allah. This world is seen as a temporary plane in which we are tested and our good/bad deeds weighed on Judgement Day, i.e. after death.

Islam can be followed by anyone who declares and believes that there is only one God and that Muhammad was His final Messenger. It sees no difference between people other than in their deeds, i.e. race, wealth, nationality, etc. grant you no special status.

Muslims pray five times a day, give to charity, fast during the holy month of Ramadan and try to make a pilgrimage once in their lives to Makkah, Saudi Arabia. 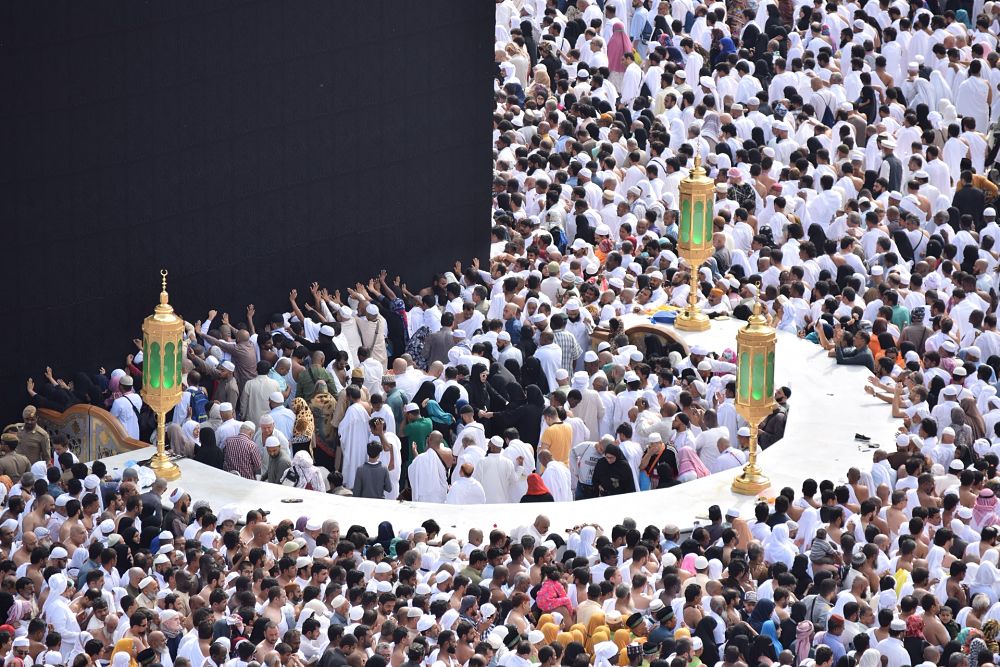 Worshippers at the Ka'aba during the holy month of Ramadan. Photo by Haidan on Unsplash

What are the Origins of Islam?

Muslims see themselves as simply the latest in a long line of believers in God, who have followed His Messengers over time. A Muslim sees Jesus, Abraham, Moses and many others as their Prophets as well as those of the Christians and Jews.

Jews and Christians are known as ‘People of the Book’ and are considered to have received divine revalation.

Islam teaches that God sent Jesus to rid Judaism of corruption and abuse by man. Similarly Muhammad was sent to purify what had become of Jesus’ teachings.

However, the difference between Muhammad and all other Prophets is that he is the ‘Seal of the Prophets’, the final messenger to come before the end of time.

Muhammad received revelation at the age of 40 while on seclusion in a cave in Makkah. This was through the Angel Gabriel. What has become to be known as The Quran is actually the written collection of all revelations received from Gabriel over the course of years. These were written down by his followers and after Muhammad's death collated into one book.

Islam spread from being a small group of spiritual rebels and slaves to conquering the Hijaz area including the capital city of Islam, Makkah (also spelt Mecca).

Makkah is seen as the first place of worship built to one God; it was built by Abraham and thus is considered the holiest place on earth. The picture of the black, square building is called the Ka'aba. 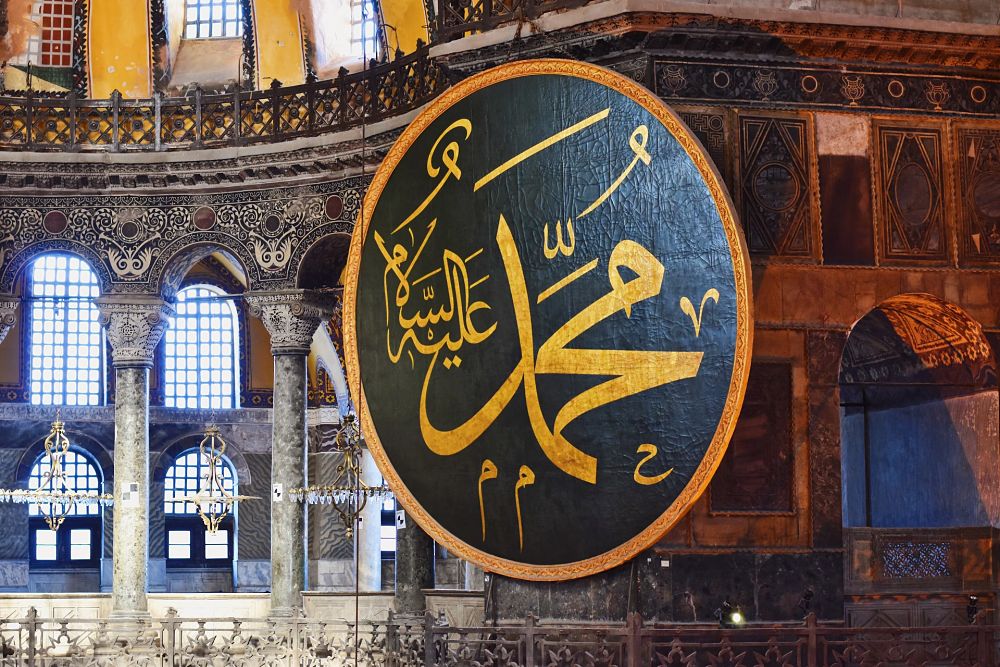 Across the Muslim world you will see the word Muhammad written in Arabic. This example from Istanbul, Turkey. Photo by Rumman Amin on Unsplash

Where do Muslims Live?

Muhammad lived in modern day Saudi Arabia and upon his death the Islamic Empire spread across continents to now see it have adherents in as far flung places as Indonesia, Nigeria, Iran and Turkey.

According to estimates, the total Muslim population in the world today is around 1.6 billion.

The world’s most Muslim-populous country is Indonesia (around 207 million) with Pakistan being the second (around 160 million). Interestingly, the entire Muslim population in the Middle East, which is predominantly Muslim, is around 275 million.

Islam is the fastest growing religion in the world, with estimates suggesting that in North America alone around 100,000 people embrace it every year.

There are around 60 countries which have significant numbers of Muslim populations. 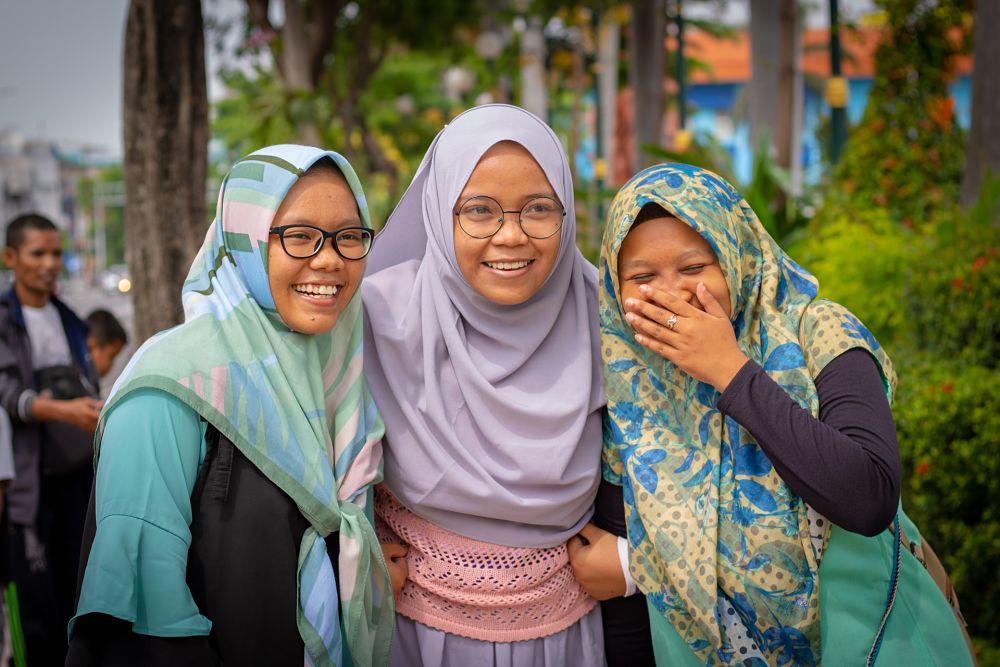 Indonesia claims the title as the country with most Muslims. Photo by Hobi industri on Unsplash

Who are the Sunni and Shia?

There are two major sects, the Shia and the Sunni.

The two mainly differ on political leadership issues; specifically, who had the right to govern Muslims after the death of Muhammad?

The Shia claim it should have gone to the House of the Prophet, i.e. his next of kin, Ali. The Sunni say a democratic process took place at the time and Abu Bakr, the Prophet's best friend, was rightly voted to lead.

Since that decision the two sides have not seen eye to eye although in essence they practice much the same.

As well as differences in terms of political and spiritual authority, the Sunni and Shia also differ in some practices.

A very basic example is the Shia pray with their hands to their sides, while most Sunni pray with hands on their chests. These small and subtle differences come down to the scholars that people follow; it is these scholars that interpret and give fatwa (rulings) on all matter of practicalities that people then follow.

The Sunni and Shia have always had a very separate scholarly sytem. 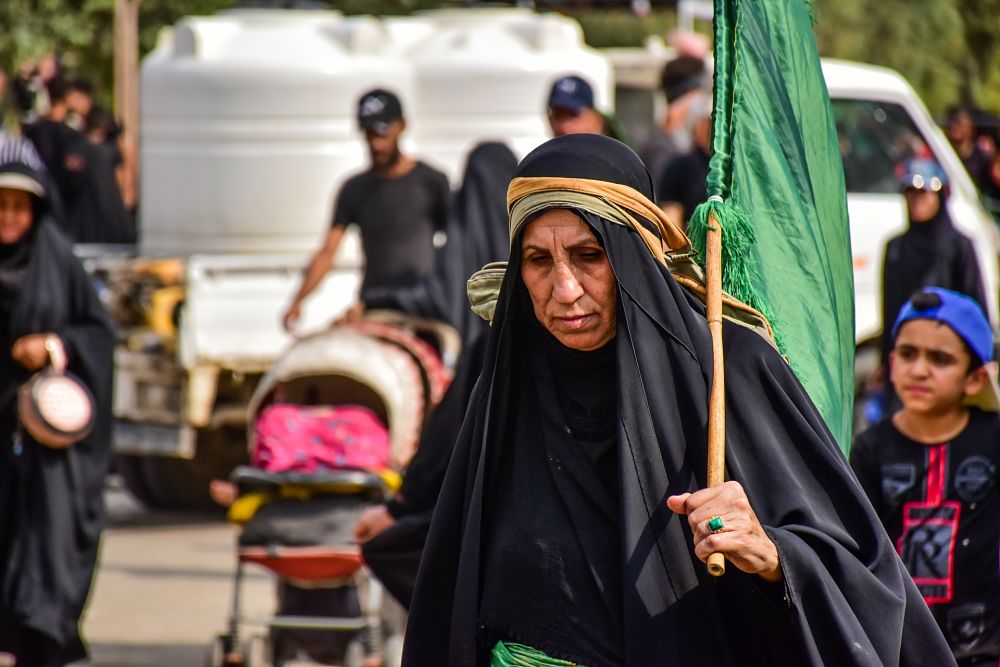 An Iranian Shia pilgrim on her way to Karbala in Iraq. Photo by ‏🌸🙌 في عین الله on Unsplash

What are Islamic Beliefs and Principles?

Beliefs are governed by a principle called Aqeeda – tenets of faith, i.e. the things you have to believe to be a Muslim as opposed to not.

There are 5 well known ‘pillars of Islam’ – these being:

These are simple points that establish boundaries for practising Muslims.

There are also a lesser known 7 'pillars of faith' which are:

Should someone not believe one of these points, they would technically not be a Muslim. 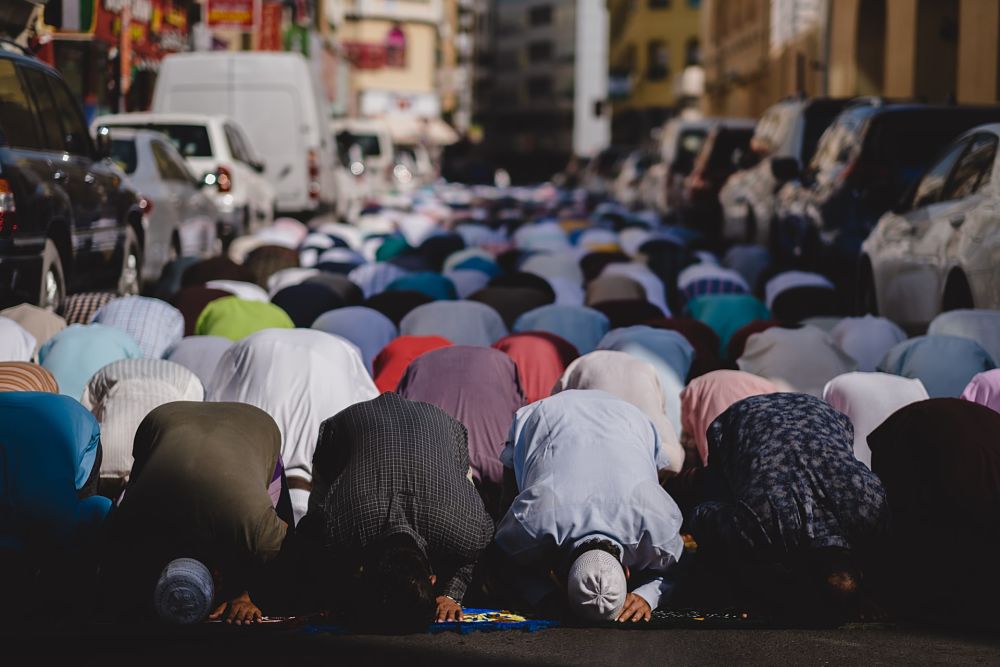 Worshippers in Dubai, UAE have to pray on the street due to the mosque being full to capacity on the holy day of Friday. Photo by Levi Meir Clancy on Unsplash

What is Shariah Law?

Shariah is the name of Islamic law - all Muslims live according to it as it covers very mundane aspects of life even down to how to wash after using the toilet to the rights children have over their parents to what food you can or can’t eat.

It is impossible to be a practicing Muslim without obeying Shariah law.

Interpretations within shariah law can vary dramatically from topic to topic and from place to place. Many scholars agree that the Quranic edict that there must be "no compulsion in religion" should form the basis of all laws.

It is crucial to understand that Islam purposefully allows for difference of opinion; in fact, it is encouraged.

This is why we see sometimes wildly different interpretations and practices between Muslims. Interpretations change from culture to culture, place to place, person to person, etc.

The Al Aqsa mosque in Jerusalem, Palestine is the 3rd holiest site in Islam as it's where Muhammad experienced a divine journey, known as the Ascension. Photo by ekrem osmanoglu on Unsplash

This is an impossible question to answer. In short, Allah is the Creator – He is the being that was before time and space. He made everything.

However, it is very important to understand that Muslims do not see Allah as being anything – He is not a He or a She, or an It or a thing.

Allah is not creation.

We cannot fathom Him.

We can however come to know Him in other ways, such as through looking to creation for glimpses of divine artistry.

Muslims don’t ascribe anything to Allah other than his status as Creator and through attributes such as Most Merciful, Most Compassionate, Most Wise, etc.

He has 99 formal names which most Muslims memorise. The Arabic form of letters that spell Allah are commonly seen across the Muslim world. In mosques as per the photo of the boy on the left, in cars, on buses, in schools, everywhere. Remember in Arabic they read from right to left! 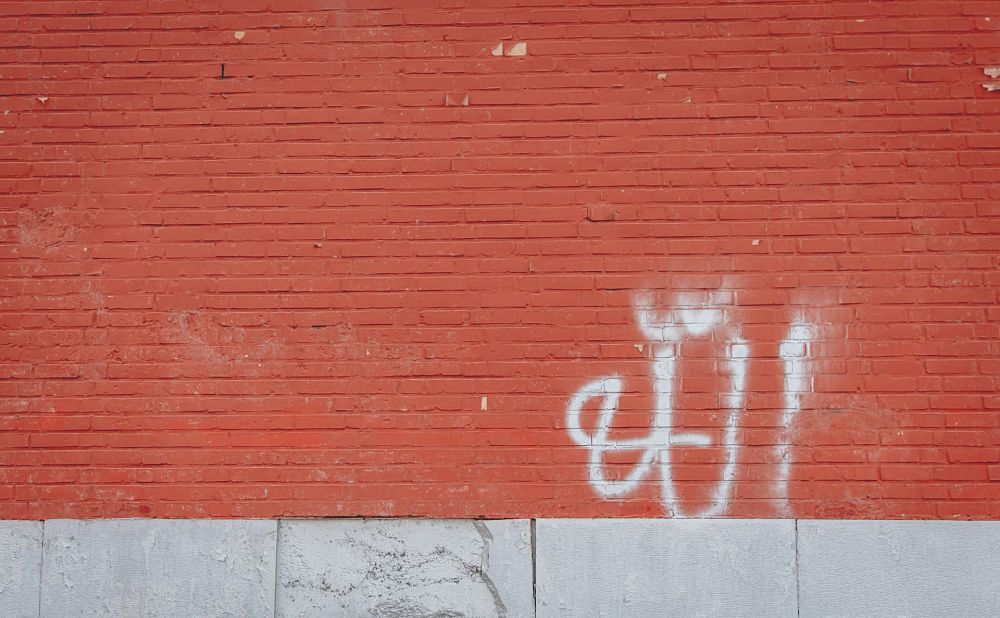 'Allah' grafitti on a wall in Ahvaz, Iran. Photo by Ashkan Forouzani on Unsplash

Muslims have to pray 5 times a day. Before dawn, midday, late afternoon, sunset and at dark. Prayer is linked to the cycle of the day and taking time out to connect with God in order to remember the purpose of life.

Muslims stand facing Makkah and will recite some words from the Quran before bowing and prostrating. During the prayer they do not break focus and will stare at the floor.

The prayer can take only minutes to perform. Prior to prayers Muslims carry out ablutions to cleanse themselves. 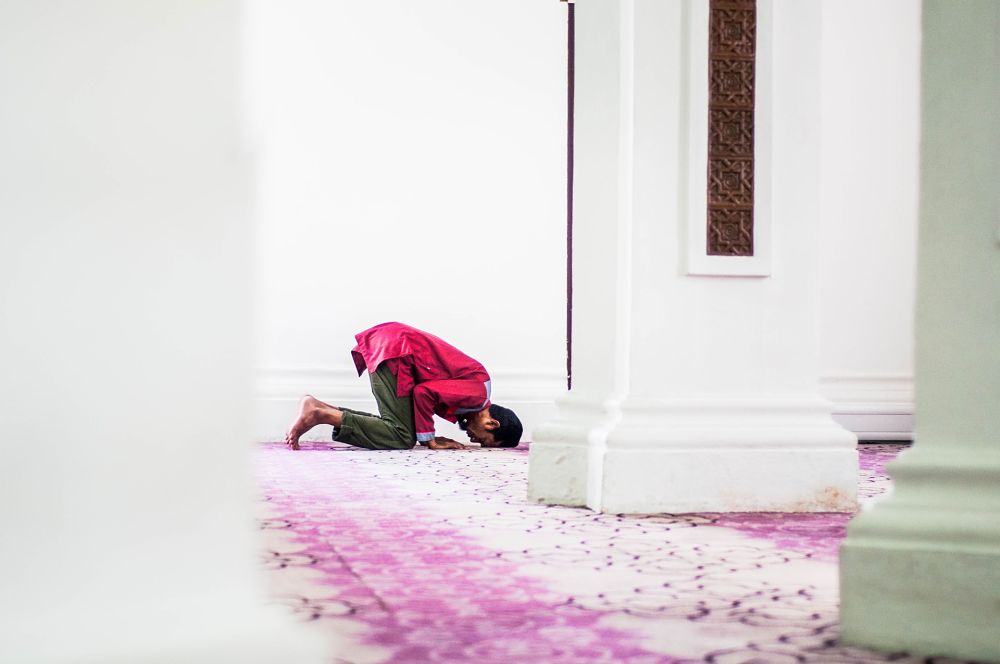 A man says his prayers in a mosque in Kuala Lumpur, Malaysia. Photo by afiq fatah on Unsplash