A Brief Introduction to Hinduism Hinduism is a religion that originated in the Indian subcontinent.

Purists refer to it more as Sanātana Dharma (the eternal path/law) rather than a religion, as it is believed to be a virtuous way of life.

It is the oldest practised religion in the world and has the third largest following after Christianity and Islam.

It has over a billion practising followers, 90% of whom live in South Asia, particularly India, Nepal, Sri Lanka and Bhutan (which is the only official Hindu state in the world).

Having originated in the Indian subcontinent, it has spread selectively to other parts of the world owing to migration, as the ideas of conversion and evangelisation are absent in Hinduism.

What is the History of Hinduism?

The term Hinduism is derived from the word ‘Hindu’, which is a Persian distortion of ‘Sindhu’, the ancient name for the River Indus running through northern India.

To that end, it is less a religion than a codification of the evolving way of life and beliefs of the inhabitants of the region. A conglomerate of diverse beliefs and traditions, Hinduism has no single founder. 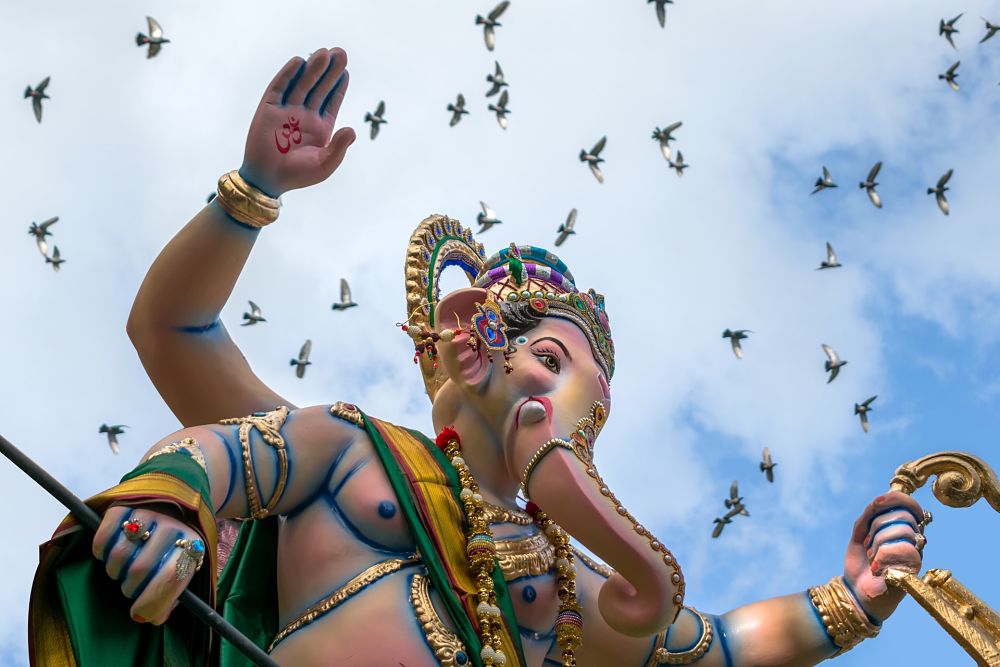 Photo of Lord Ganesh in Mumbai, India. Taken by Sonika Agarwal on Unsplash

The advent of the Aryans into north India assimilated certain beliefs of the late Neolithic and early Harappan period (5500–2600 BC) to their own religious beliefs.

Modern Hinduism grew from the ancient texts called Vedas, and bore much similarity to other Indo-European religions like Zoroastrianism, incorporating strong elements of nature gods and their worship. Vedic Hinduism had spread all over the Indian subcontinent by the 4th century BC, assimilating elements of all local religious beliefs and practices. Over the next 10 centuries, it evolved further and also absorbed tenets of Buddhism and Jainism, which included the doctrine of non-violence and an emphasis on vegetarianism.

Under the classical Golden Epoch of the Gupta period (4th to 6th century AD) more formalized Hindu thought and its systematization flourished. By then many classical works (shastras) of Hindu philosophy had been codified, the major epics—the Rāmāyana and Mahābhārata—received their present form and rules for idol worship, representations of the deities and for building structures and temples also developed. This assimilation lasted until the advent of political Islamic control in India in the 7th century.

While there were a number of attempts to reconcile both Hindu and Muslim theology over the next 8 centuries, mainstream Hinduism became more orthodox and codified. The rise of the Bhakti (devotion) and Sufi movements at this time, preaching piety and love for God, brought about a point of communion between the two religions that left in its wake some of the most evocative devotional corpus in Indian history. Under the British Empire, Hinduism underwent a number of social reforms, and there were many revivalist and spiritual movements in the 19th century.

Does Hinduism have a Central Authority?

Hinduism has no central doctrinal authority and most practicing Hindus do not claim to belong to any particular denomination.

However, there are various denominations in Hinduism based primarily on the God worshipped as the Supreme One, as well as those that developed as a result of the reform and revivalist movements within Hinduism, though they are not antagonistic to each other. 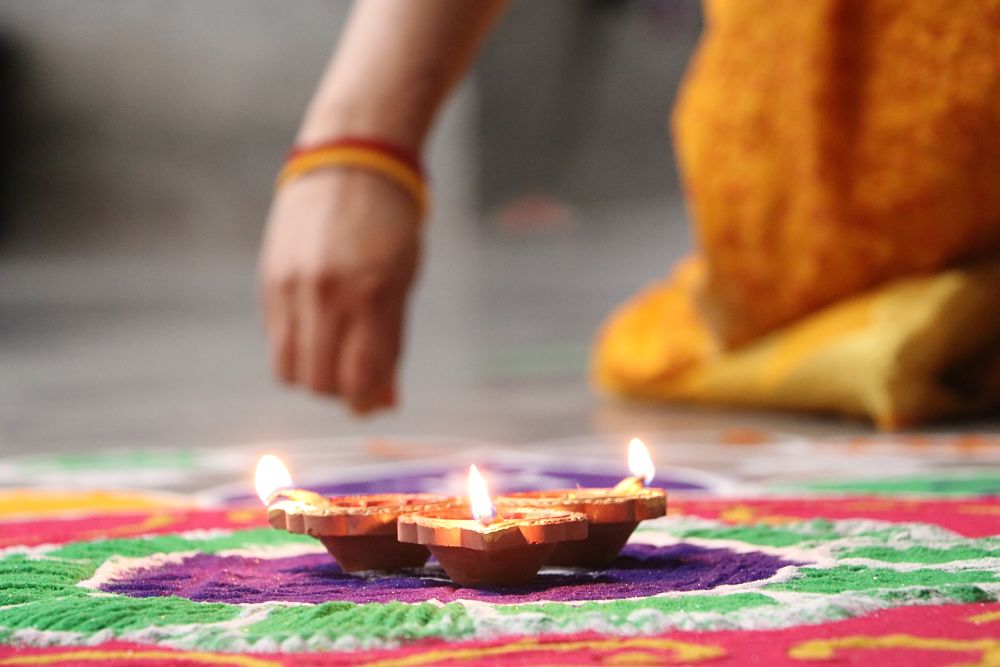 Diwali is a festival of lights and one of the major festivals celebrated by Hindus, Jains, Sikhs and some Buddhists.

The religious texts of the Hindus span a very large corpus, most important of which are the four Vedas (called Ṛg-, Sāma- Yajus- and Atharva-) which focus on rituals, and the Upanishads and Puranas , which focus on spiritual insight, mythological accounts and philosophical teachings. Apart from this, there are a number of classical texts (shastras) of Hindu philosophy as well as the major epics—the Rāmāyana and Mahābhārata.

While it is difficult to completely define Hindu beliefs, the major themes in Hinduism include Dharma (code of ethical conduct), Samsāra (The continuing cycle of birth, life, death and rebirth), Karma (action and subsequent reaction), Moksha (liberation from samsara), and the various Yogas (paths to attain Moksha).

The concept of God is very complex. Most Hindus believe in Brahman, the supreme spirit that pervades the Universe, and that the human spirit or soul (ātman) is eternal and an indistinct part of Brahman.

What are Hindu Beliefs?

The goal of life is to realize non-duality, and to lead a life that leads to this realisation and thereby reaches Moksha (liberation or freedom). Other dualistic schools worship Brahman as Vishnu, Brahma, Shiva or Shakti depending on the sect.

The Hindu scriptures and mythology refer to celestial entities, called Devas who embodiments of nature, or qualities. They are however often distinguished from a supreme personal God. Corporeal human manifestations of God are known as Avataras. 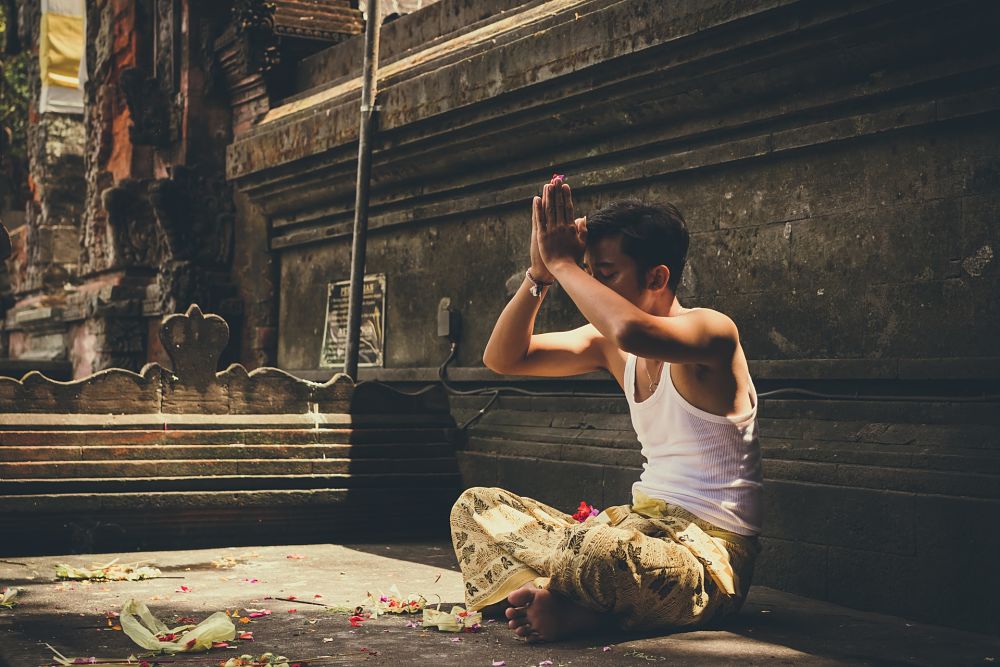 A Hindu worshipper in Bali, Indonesia. Photo by Artem Beliaikin on Unsplash

Most practising Hindus engage in religious rituals daily to seek blessings from various Gods, engaging in worship (puja) of the divine idol, either in shrines at home or in temples.

While it is not obligatory to visit temples, it is customary practice to do so on important festivals. Vedic rites of fire-oblation (yajna) are now only occasional practices although they are highly revered in theory. In Hindu wedding and burial ceremonies, however, the yajña and chanting of Vedic mantras are still the norm.

Occasions like birth, marriage, and death involve what are often elaborate sets of religious customs. On death, cremation is considered obligatory and is typically performed by wrapping the corpse in cloth and burning it on a pyre.

Pilgrimage is not mandatory in Hinduism, though Hindus have several holy cities and temple cities. Important centres of Hindu pilgrimage include Allahabad, Varanasi, Hardwar, Tirumala - Tirupati and Katra, home to the Vaishno Devi temple, as well as sets of pilgrim centres linked together with theology. Hinduism has many festivals throughout the year, which are assigned by the Hindu calendar. Hindu festivals usually have their grounding in mythology, and some widely observed Hindu festivals include Holi, Dussera and Diwali.

However, the most important impact of Hinduism has been on the evolution of society. According to traditional Hindu belief, there are four stages of a human life (Āshramas), which are the stage as a student (spent in celibate, controlled, contemplation under a teacher), householder, retirement (gradual detachment from the material world) and finally asceticism to find Moksha.

Society was classified into four classes, called Varnas – teachers and priests (Brahmins), warriors, nobles, and kings (Kshatriyas), farmers, merchants, and businessmen (Vaishyas) and the servants and labourers (Shudras). This classes slowly evolved to extremely rigid castes and sub-castes, setting in place an exceedingly oppressive hierarchy over the course of history.

Most reform movements in the 19th and early 20th century addressed a number of these issues, and modern Hinduism is far more liberal, though the principles of caste and class still tend to become important in issues of marriage and social norms and politics.

Photo by Onkarphoto on Unsplash