A Brief Introduction to Buddhism Did you know that Buddhism, in its natural form, is not a religion?

Rather it is a tradition that focuses on personal spiritual development.

Buddhists strive for a deep insight into the true nature of life and do not worship gods or deities.

Want to learn more about Buddhism?

Then you're in the right place!

We'll give you a quick overview of its origins and beliefs.

What are the Origins of Buddhism?

Buddhism was founded in Northern India by the first known Buddha, Siddhartha Gautama, in 6th century BC, after he attained enlightenment and assumed the title Lord Buddha (one who has awakened).

Siddhartha Gautama, later known as Buddha, was a prince of the Sakya tribe of Nepal in approximately 566 BC.

At the age of 29, leaving the comforts of his home, he undertook a journey to seek the meaning of the suffering he saw around him. After six years of arduous yogic training, he abandoned the way of self-mortification and instead sat in mindful meditation beneath a bodhi tree.

On the full moon day of May, Siddhartha Gautama became the Buddha, the enlightened one.

The Buddha wandered in the plains of northeastern India for over four decades, teaching the path or Dharma he had realized in that moment. Around him developed a community or Sangha of monks and, later, nuns, drawn from various tribes and castes, devoted to practicing this path. In approximately 486 BC, at the age of 80, the Buddha died. His last words are said to be... “Impermanent are all created things; Strive on with awareness.” 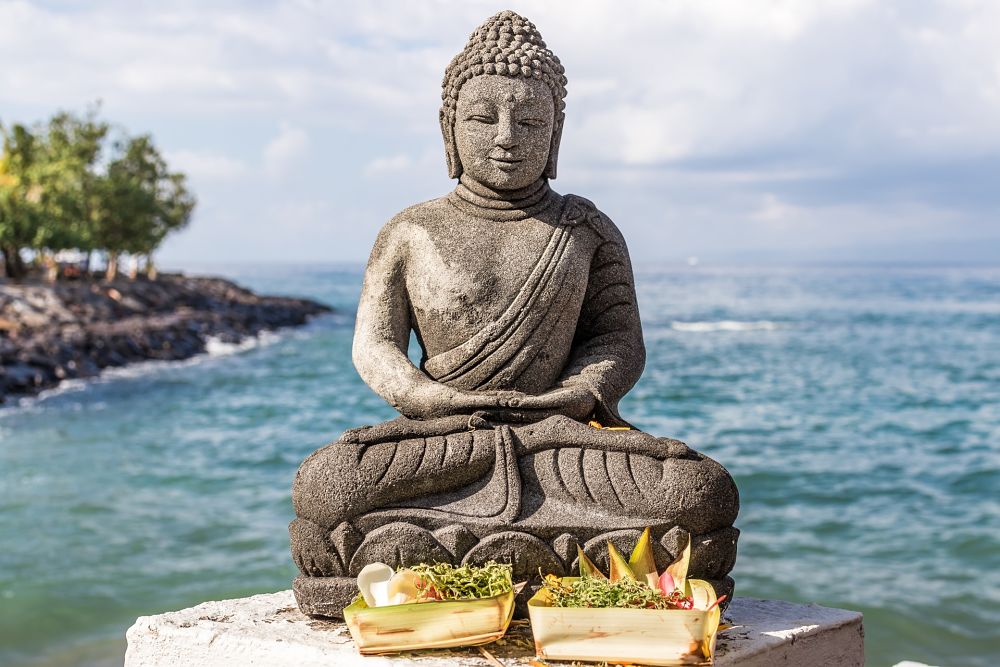 Statue of Gautama Buddha by Artem Beliaikin on Unsplash

Where do Buddhists Live?

Buddhism, which is followed by over 5% of the world’s population, lays claim to be the fourth largest religion in the world after Christianity, Islam and Hinduism.

Buddhism has largely disappeared from its country of origin, India, except for the presence of many refugees from the Tibet region of China and a small number of converts from the lower castes of Hinduism. It has though taken firm root in Sri Lanka.

What are the Buddhist Schools of Thought?

Broadly, Buddhism can be divided into two main schools, the Theravada or Hinayana in Sri Lanka and South East Asia, and the Mahayana in China, Mongolia, Korea, and Japan.

A third school, the Vajrayana, has a long tradition in Tibet and Japan.

It is clear that Gautama, the founder of Buddhism, did not claim to be divine. Although several sects have elevated him to the status of a god, he clearly claimed that he was only showing the way to nirvana. 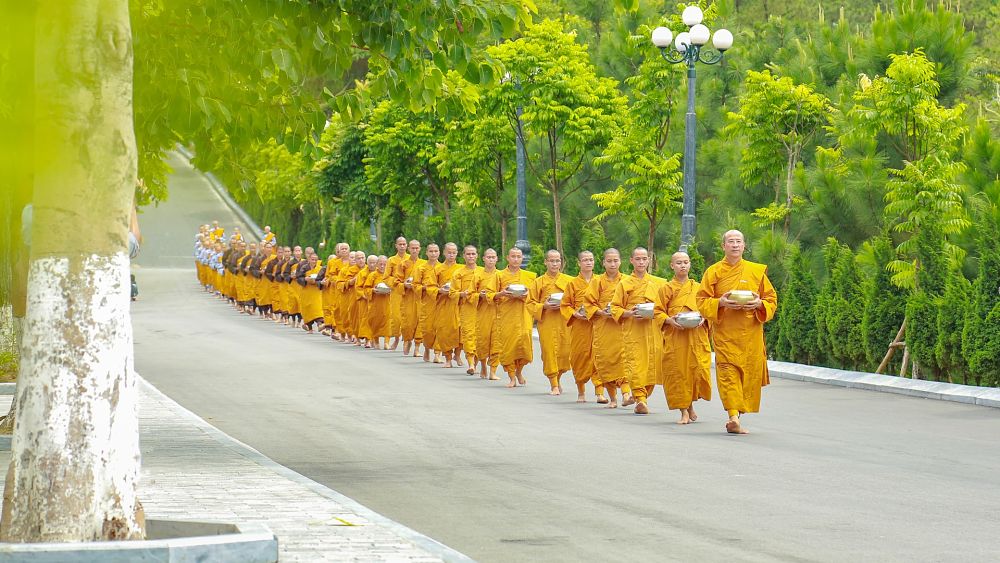 What's the The Goal of Buddhism?

Nirvana. Most people have heard of nirvana, which has come to be equated with a sort of eastern version of heaven.

Nirvana, in true terms, simply means cessation – cessation of passion, aggression and ignorance; the cessation of the struggle to prove our existence to the world, to survive.

We don't have to struggle to survive after all as we have already survived, the struggle is just an extra complication that we have added to our lives because we have lost our confidence in the way things are.

Buddhist Festivals are always joyful occasions. The most significant celebration takes place every May on the night of the full moon, when Buddhists all over the world celebrate the birth, enlightenment and death of the Buddha over 2,500 years ago. It has come to be known as Buddha Day.

A visit to the local temple or monastery is a common custom on festive days, where the monks are served food; the ‘Five Precepts’ are also undertaken. Poor people are fed in the afternoon and a ceremony is conducted in the evening, in which people circumambulate a stupa three times. The day draws to a close with the chanting of Buddha's teachings and meditation.

Wedding ceremonies are regarded as secular affairs in Buddhist countries. The parties concerned, however, obtain blessing from monks at a local temple after the civil registration formalities are completed. 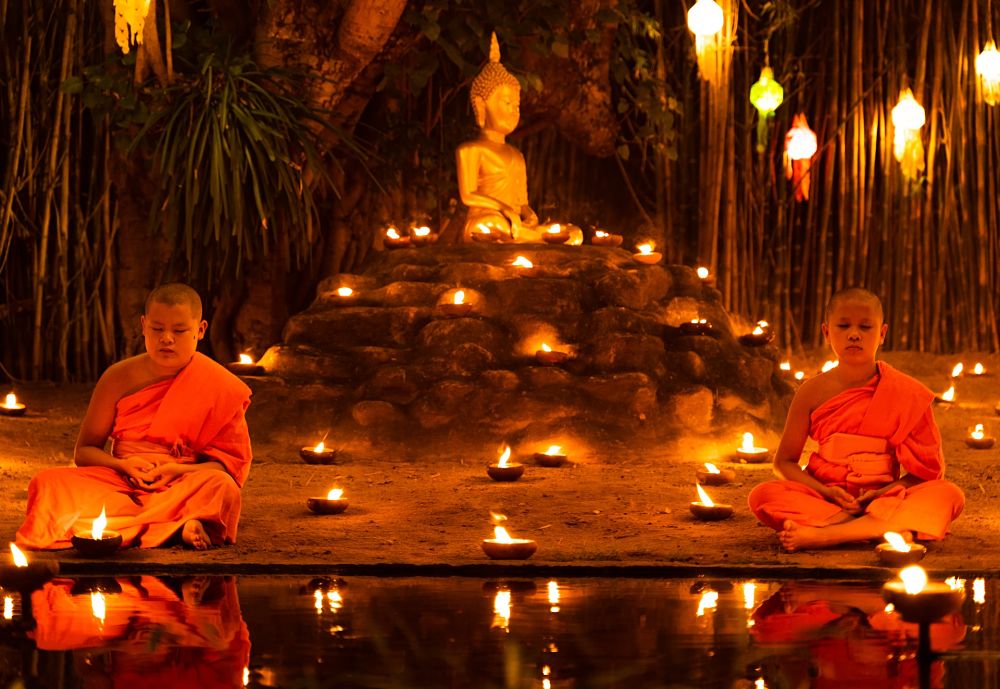 Children in meditation. Photo by Justin Merced on Unsplash

What are the main principles of Buddhism?

The main principles of Buddhism are covered by the teachings in the form of ‘The Three Jewels’, ‘The Four Noble Truths’, ‘The Noble Eightfold Path’, ‘The Five Precepts’, ‘The Three Marks of Conditioned Existence’ and ‘Vegetarianism’. The most important ones are described below.

Triple Jewels: Taking refuge in The Triple Jewels/Gems, i.e. the Buddha, the Dharma and the Sangha; does not mean self-surrender, or total reliance on an external force, or third party for help or salvation.

The Four Nobel Truths: The foundation of Buddhism is centered on the Four Noble Truths given by Buddha in his first sermon after his enlightenment. The truths are:

“..There is a path to the cessation of suffering, the ‘eightfold path’ of right views, right resolve, right speech, right action, right livelihood, right effort, right mindfulness, and right concentration. Buddhism characteristically describes reality in terms of process and relation rather than entity or substance.”

The Five Precepts: These basic training rules are observed by all practicing lay Buddhists: 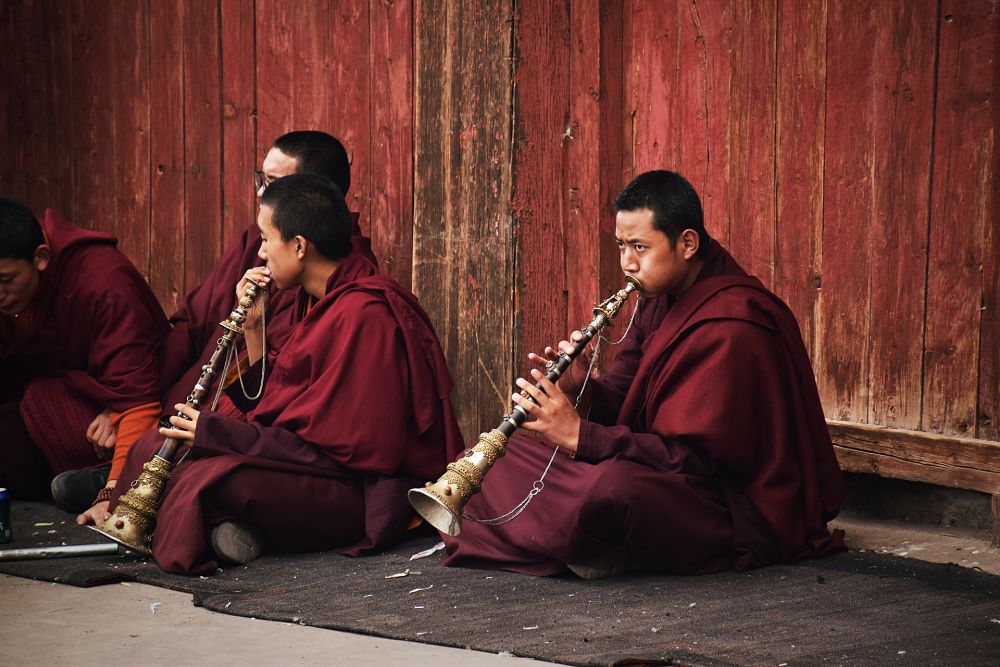 Who are the Dalai Lamas?

Tibetan Buddhists hold the Dalai Lama to be one of the incarnations of Avalokiteœvara, the bodhisattva of compassion.

The 14th ‘Dalai Lama’, Tenzin Gyatso, soon after China’s invasion of Tibet, fled to India and now lives in exile in Dharmasala, India. He is the recipient of the Nobel Peace Prize for his non-violent struggle for the liberation of Tibet, and he describes himself as “a simple Buddhist Monk”

The following words of the current Dalai Lama sum up how Buddhists are supposed to view themselves and others:

"Who is more important, you or others? The conclusion is clear; even if minor suffering happens to all others; its range is infinite, whereas when something happens to me, it is limited to just one person. When we look at others in this way, oneself is not so important."

You may also be interested in reading about the following: