A Brief Introduction to Bahai Did you know that the Bahai faith is the youngest independent religion of the word?

Mirza Husayn Ali is known to the world as ‘Baha Ullah’ and regarded by Bahais as the most recent in the line of Messengers of God.

What are the Origins and History of Bahai?

The Bahai religion originally grew out of the Babism faith, which was founded in 1844 by Mirza Ali Mohammad of Shiraz (Iran) who proclaimed a spiritual doctrine emphasising the forthcoming appearance of a new messenger of God who would overturn old beliefs and customs. Mirza Husayn Ali claimed to be this new messenger of the era and was renowned Baha Ullah meaning ‘glory to God’.

Before Baha Ullah died in 1892, he appointed his eldest son, Abdul-Baha (1844-1921), to be his successor, lead the Bahai community and act as the authorised interpreter of his teachings. Under Abdul-Baha’s leadership, the Bahai faith spread to other continents.

The Bahai community is governed according to general principles proclaimed by Baha Ullah and through institutions created by him that were elaborated and expanded by Abdul-Baha. In building a unified network of local, national and international governing councils the Bahai community has, comparative to other religions, social or political movements, achieved unity and is free of any schism.

The Bahá'í ringstone symbol, representing humanity's connection to God through the Manifestations of God (Prophets)

Where do the Baha Live?

The Bahai population has greatly and rapidly increased in number and spread all around the globe. There are more than 5 million Bahais in the world, with the largest communities residing in India, Iran, Africa, Latin America and relative to its population size, in some Pacific Islands. More than 2,100 different ethnic and tribal groups represent the Bahai faith.

What are Bahai Principles and Beliefs?

Baha Ullah taught that there is only one God, there is only one human race, and that all the world’s religions represent stages in the revelation of God’s will and purpose for humanity. God, who in his essence is unknowable, can be made known to man through manifestations through His messenger, including Abraham, Krishna, Moses, Zoroaster, Jesus, Muhammad, the Bab, and Baha Ullah. Baha Ullah being the most recent in this succession of divine Messengers. All these messengers were sent at various stages of human progress as part of a divine plan to educate the human race. Essentially, they all taught an identical truth.

The most core tenet of Baha Ullah’s message is that of unity between all humans. According to Baha ullah, God has set in motion historical forces that are breaking down traditional barriers of race, class, creed and nation and that a time will come when universal civilization will be achieved.

Bahais believe that a global society is bound to flourish through universal education, elimination of all forms of prejudice, world peace, equality of men and women, recognition of the oneness of the world’s great religions, harmony of science and religion, balance of nature and technology, elimination of extreme wealth and poverty and living a simple life.

Photograph of the Greatest Name at the top of the interior of the Baha'i House of Worship in Wilmette, Illinois. Photo by Sean M. Scully (click image to see source on Wikipedia)

What is the Purpose of Life in Bahai Belief?

Human beings are spiritually from a different order than that of animals and all other living things. According to Baha Ullah, everything in creation is capable of reflecting some of the divine attributes; human beings alone have the capacity to reflect them all.

Baha Ullah distinguishes between two types of human nature: one that is the lower aspect which is concerned with the material or animal side of our life and the second being the higher aspect or the spiritual side. The higher aspect is what makes us truly human and so we must constantly struggle to ensure that our higher side overcomes our animal side.

Why is Marriage so Important to the Bahai?

There is great emphasis on family life as being the foundation for the society's stability and progress because it is through a strong family background that a spiritual and harmonious environment is created to raise and educate children, as education is also deemed essential by the teachings of Baha Ullah.

Marriage is considered as a commitment of two people from one to the other, and their mutual attachment of mind and heart. The spiritual aspects of this union are more important than the physical union. Baha Ullah’s teachings are clear that marriage is the natural and rightful way of life and therefore, marriage is considered most advisable. He also stressed emphasis on the spiritual nature as being more essential aspect of marriage than the physical aspect i.e. it is more important that the couple live in love and harmony than that they should be consumed with passion for each other.

Separation or divorce is permitted according to the Bahai scriptures. Nevertheless, it is strongly discouraged because in Bahai faith it is unity of the family at the foundation level, which subsequently leads to unity of the society. Therefore, separation or divorce should be avoided as it leads to social disintegration as well as disruption of the family and must be left as the absolute last resort. 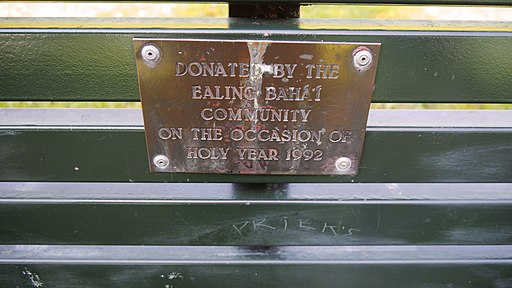 A public bench in Ealing, London (UK) dedicated to the local Bahai community. Click image to see source on Wikimedia.

How do the Bahai Worship?

The Bahai sacred texts are a compilation of the writings and spoken words of Bab, Baha Ullah and Abdul Baha. Anyone who professes their faith in these sacred teachings and believes that Baha Ullah is the most recent messenger of this era is accepted in the community without any ceremony/sacrament and there is no clergy involved.

However, it is a spiritual obligatory upon every Bahai to pray daily and regularly, to fast 19 days a year (from sunrise to sunset), to abstain from alcohol or any substances that may have affect ones mental-state, to practice monogamy, to obtain the consent of parents to marriage and to attend the 19 Day Feast on the first day of each month of the Bahai calendar which involves prayer through reading of the sacred texts, discussing community activities and issues, enjoying the company of each other in order to ensure universal participation in the affairs of the community and the cultivation of the Bahai fraternity.

There is no hierarchical organisation of priesthood and no formalised rituals in the worship. In the temples, the services consist of recitation of the sacred scriptures but there is no preaching.

Main photo by Rade Šaptović on Unsplash shows the view over the Bahá'í gardens and the Shrine of the Báb in Haifa, Israel.