What Behaviours are Rude in the Middle East? If you’re travelling to the Middle East on business, and want to make a good impression, then it’s important you understand behaviours that are considered rude – or even taboo.

The Middle East is a large region, made up of many different countries – and hence cultures.

As such, a behaviour that might be tolerated in one part of the Middle East, might not be viewed so flexibly in another.

However, we’ve highlighted some behaviours which are considered rude and offensive in a blanket sense across most of the Middle Eastern cultures.

DON'T MISS THE FREE SAMPLE OF OUR MIDDLE EAST COURSE AT THE END!

1. Don’t show the soles of your feet

The soles of your feet are considered dirty as they are the lowest part of the human body and the part of the body that touches the floor.

To sit and have the soles of your feet showing is bad manners, even if you happen to be showing just one sole by crossing your legs.

The role of the feet as dirty also extends to the placing of feet on seats. If you’re caught putting your feet on a public chair (e.g. on a train or bus seat), then you’re likely to be perceived as uncouth and rude.

Another part of the body that carries a taboo is the left hand. The left hand is typically only used for cleaning oneself after using the bathroom.

On top of this, within Islamic traditions, the left hand and right hand also carry spiritual symbolism; the right hand represents good, the left represents bad. As a result, it’s considered bad manners and impolite to pass things (such as money, gifts or food) with your left hand.

Collective meals, shared from large bowls, placed in the centre of the eating space, are a common way of sharing food in Middle Eastern culture. If you are invited to share food in this way, then only use your right hand to take bread or to ladle sauces etc. If you use your left hand, then your behaviour will be frowned upon. 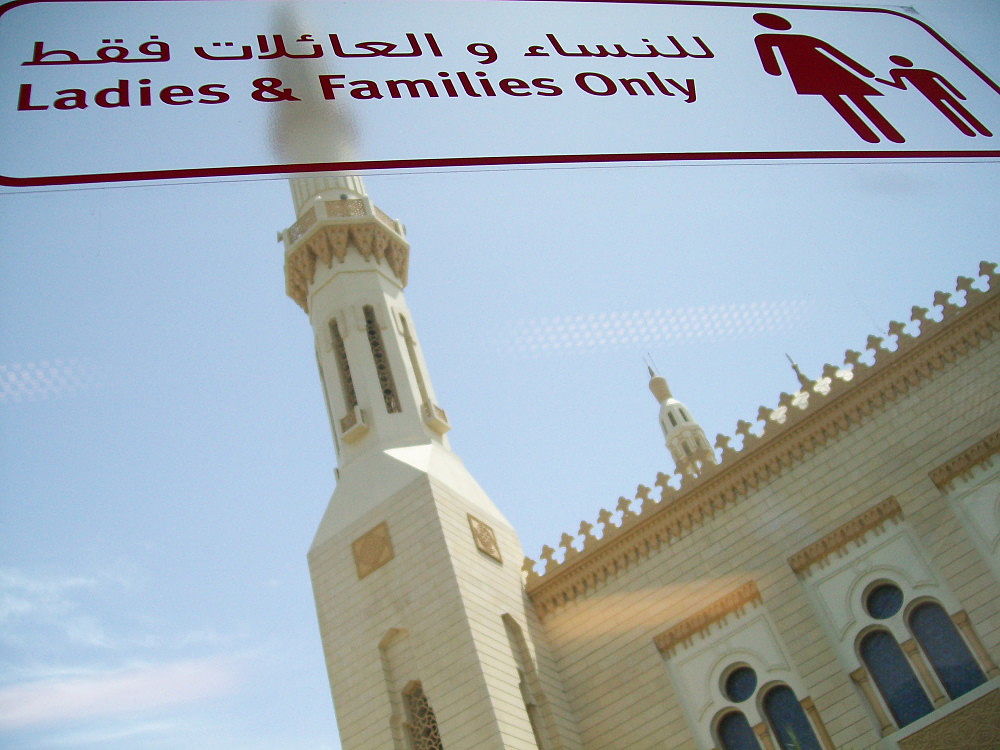 Segregation of the sexes is common across the Middle East. Many Arab countries have "Family Only" sections in restaurants and shops. This means any men unaccompanied by a woman are not allowed entry.

In most cultures within the Middle East, swearing, especially in public, is taken a lot more seriously than elsewhere in the world.

To openly and audibly swear in public is considered extremely rude and, depending on the context, it may even lead to you being arrested. There have been many cases of foreigners being arrested in the UAE for swearing in public.

On this note, it’s important to bear religious sensitivities in mind and avoid language such as ‘Oh my God!’, ‘For God’s sake!’, or ‘Jesus Christ’.

4. Keep your affections behind doors

Showing public affection is generally considered rude and disrespectful across the Middle East.

Although some cultures within the Middle East might be more tolerant than others, it’s generally not a good idea to kiss, hug or openly display intimacy. In some countries in the Middle East, this digression is viewed so seriously that it can lead to foreigners being imprisoned.

On a related note, homosexuality is also frowned upon in many countries across the Middle East. If you are in a same-sex relationship, then it’s wise to be incredibly discreet about this – particularly if your partner is travelling with you.

5. Keep your opinions to yourself

Another taboo, also punishable with prison, is to openly criticise the government or royal family. In some countries, especially in the Gulf, any sort of slight on the royal family can lead to serious consequences.

Even if you’re not reprimanded by the authorities, your Middle Eastern counterparts may well consider your comments to be incredibly rude and disrespectful. If someone asks you for your opinions in this respect, then feign ignorance and say that you don’t know enough about the subject to comment.

Similarly, any criticism of Islam or preaching of religion can also have potentially life-changing consequences. Avoid making any comments at all about religion – particularly about Prophet Muhammad or the Islamic religion as, at the very least, your comments might be misconstrued, and you might be viewed as rude or ignorant.

Travel to the Middle East

So, when travelling to the Middle East, be mindful of these behaviours and be aware of the significant punitive punishments that can arise if you fall foul of them.

Always err on the side of caution and don’t fall into the trap of feeling that you can ‘break the rules’ when you’re around people with whom you have built a relationship.

To make the best impression, these considerations apply at all times, with all people.

If you want to learn more about the culture in the Middle East, and specifically get insights into the business culture, then sign-up for our e-Learning course!

Here's a sample of the course video.